Home Featured Home Snyder focuses on getting back to football

After several months of cold, snow and ice, spring has arrived. And it’s never more apparent than at Bill Snyder Family Stadium and the Vanier Football Complex when the Kansas State football team has begun spring practices.

The Wildcats started practice about a week ago and will do so every Monday, Wednesday, Friday and Saturday leading up to the spring game on April 22.

Snyder said the diagnosis was not what he nor anybody wanted to hear, but that he is dealing with the treatments and recovery as well as you could expect.

“It is not something you want to hear, but by the same token, it is what it is,” Snyder said. “You have to deal with it. I am finished with all the treatments. I am going through all the after-effects right now. I will get tested again in a few months. The hardest part is the after-effects that come along with it. That is what we are going through right now. Millions and millions of people have done it.”

Snyder said he was overwhelmed by the outpouring of support from the community and people all across the country.

“All the support has been a very humbling thing,” Snyder said. “I cannot tell you how many thousands of responses have come in. People are so gracious and so kind, all across the country, locally and within the university and the nation. People are very gracious.”

Despite the diagnosis and the after-effects, Snyder said he is back to working around the same numbers of hours he usually would. He did say the amount of time spent in his office has had to decrease and the type of work has had to vary.

“Earlier, when he was going through treatments, he obviously wasn’t around as much, he was getting treatment,” Delton said. “But for the most part, when Coach comes and talks to us and is around, it’s still Coach, so from that point we haven’t seen much of a difference.”

The focus of Tuesday’s conference was not all on Snyder’s diagnosis. The Wildcats have a large number of starters returning to the field after finishing last season at 9-4, including a Texas Bowl victory over Texas A&M in late December.

Sophomore running back Alex Barnes said he was more than ready to go once the first spring practice arrived last Wednesday.

“Pretty eager that first practice, I got a little too antsy and hit a couple people I probably shouldn’t have, but that’s football,” Barnes said.

Snyder said he has generally liked what he has seen so far from the first couple of practices, even though the offseason was not quite up to his standards.

“I was very pleased with our first two practices,” Snyder said. “They were very upbeat, they moved very rapidly and we practiced faster. Their spirit was good. The third practice was a bit of a letdown. Yesterday (April 3) was kind of a mixed bag. We had a little bit of a scrimmage, which is usually always upbeat, but I think our guys are always into it.

“I was not very pleased with our out-of-season program,” Snyder continued. “It could have been much better than what it was. Just some of the responsibility aspect of it. So far they have gotten off to a decent start in spring practice.”

Snyder said senior quarterback Jesse Ertz will likely not participate in any spring practices after having surgery earlier in the offseason. Sophomore quarterbacks Alex Delton and Hunter Hall, as well as redshirt freshman quarterback Skylar Thompson, will receive the spring practice reps instead. Of the bunch, only Delton has seen regular season action.

Departures from last season have left open spots at linebacker, safety and right guard, among others. Snyder said senior linebackers Jayd Kirby and Trent Tanking, as well as junior linebacker Sam Sizelove, stand out so far for lead linebacker. Senior safety Sean Newlan is likely next in line at the safety position with sophomore safety Denzel Goolsby right behind him. On the offensive line, Snyder said sophomore offensive lineman Tyler Mitchell will move into the void left by right guard Terrale Johnson. 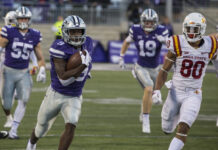 Through the Eyes of The Pride: Nights in White Satin