“Leave it better than you found it.”

After spending seven years as the assistant director of bands, Don Linn is stepping down from the position to pursue his doctorate of musical arts in conducting at the University of Oklahoma.

Linn said he hopes he is leaving the Kansas State bands better than they were seven years ago. The mindset to leave things better than he found them stems from one of the many philosophies of Frank Tracz, professor and director of bands.

“But in the larger sense, if you can come in someplace and affect people positively and leave your mark on something, leave a program better than you found it, leave a group of people better than you found it, and if you could affect some sort of change for the positive, then it’s great,” Linn continued. “The power in that philosophy is that it’s simple, it’s clear and it has a lot of truth to it.”

Linn, who was assistant director when the K-State Pride of Wildcat Land won the Sudler Trophy, said he can only hope he left the bands better than where they were seven years ago.

“I’d like to think that I did leave things better than I found them, which is difficult to do with a program that already has so much national prestige, that’s already great with numbers and growth,” Linn said. “The culture I came into was so strong already, and that was established by Dr. Tracz. But since I’ve been here we’ve experienced continued success, so the goal was met. We didn’t take steps back, we took steps forward. I’d like to think I contributed to that.”

Linn said he never thought he would have the opportunity to be a part of a Sudler Trophy winning band — the highest achievement a college band can earn — and he hopes his contribution to the award was significant.

“One of the things I think contributed to (the award) was Dr. Tracz and I both working in the same direction and working so well together,” Linn said. “I feel in these past seven years we really got to define the style of the KSUMB in sort of a definitive look and feel. Their look, their sound — so unique, so solid, clear, consistent and entertaining, which really helped us be recognized on a national level. I’m not saying I did that, but everything here is a group effort.”

Tracz said the Sudler Trophy was not earned in the last seven years, but over the last 40 or 50.

“It takes a long, long time to win a Sudler Trophy,” Tracz said. “But as we got closer to it, and as we got developed and as we started to put the right pieces together, Mr. Linn made a great contribution to the Sudler Trophy.”

“The truth is you work very hard at this job and work long hours,” Linn said. “It’s not uncommon to put in a 70-hour work week, but I’d rather work 70 hours doing this than working 40 hours in a job I didn’t like.”

Not an easy place to leave

While he knows the timing is right, Linn said leaving the people of the K-State bands is not an easy matter.

“I’m going to miss everyone here tremendously,” Linn said. “The atmosphere in the K-State bands is a unique one. I don’t think I’ve ever been to a place where the students are as caring, hard-working and thoughtful. That struck me immediately; it wasn’t something that I had to sort of seek and find out and get to know. These students here are unique in how much they care and how much passion they have.”

Sarah Grose, junior in music education, said she is “selfishly sad” Linn is leaving K-State because he was the first person who believed in her, but knows he will continue to positively impact others.

“He believed in me, not only as a player, but as a person,” Grose said. “He made me feel like I had something unique and special to offer to the band program.”

Grose said Linn continued to push her and other music students to do better, become better and make everything else better. He pushed them to strive for more and showed her and the other students how each person and player is unique.

“He makes us want to do better and leave things better than we found it,” Grose said. “The impacts he makes are going to be incredible; we know because the impacts he made here have been incredible. I just hope he knows he left K-State better than he found it and how he has inspired many musicians for years to come.” 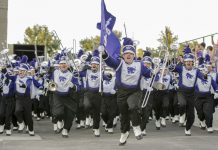 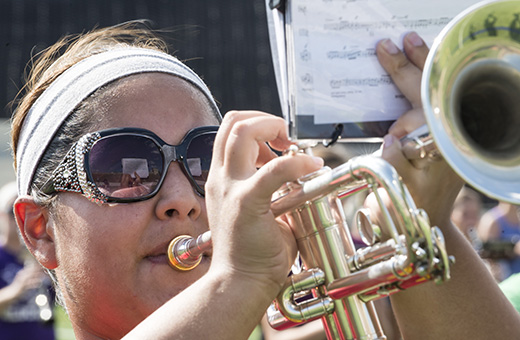