Hula hooping, bubble-wrap popping, canvas painting and bubble blowing were just some of the activities the 168 registered walkers participated in before completing a 2.2 mile walk on the Kansas State campus to raise awareness and funds for suicide prevention Saturday.

Olivia Baalman, junior in computer science, organized a week full of activities during K-State’s first Mental Wellness Week, which concluded with the “Out of the Darkness” campus walk.

“A lot of times suicide gets a negative connotation — a sad connotation — but really, you know, having a fun event to get people together and to rally about this cause is really fun to see,” Baalman said. “It’s really geared toward promoting awareness of suicide prevention efforts.”

Melissa Kurtenbach, a volunteer from the American Foundation for Suicide Prevention, said she appreciated how many people showed up to stop the negative stigma of mental illness.

“I think we all know about how the stigma of mental health and mental illness keeps people away, so it’s refreshing to see so many people here,” Kurtenbach said.

Although the event was free to register and participate in, the American Foundation for Suicide Prevention accepted donations.

“One of my favorite things about this walk that I was really excited about was it was free to register and free to participate in,” Baalman said. “I just really wanted to see our campus and community come together and engage without that barrier to entry.”

For their first walk on the K-State campus, Kurtenbach said they set what they originally thought was a bold goal of $3,000.

The 168 registered walkers raised $12,375 for suicide prevention and awareness.

All registered walkers were given the opportunity to wear beads to show their personal connections to suicide.

Katherine Mediavilla, freshman in financial management, participated in the walk to raise suicide awareness for a friend who died by suicide in high school.

“It’s been really nice and everyone has been so accepting,” Mediavilla said. “Everyone is happy and there’s positive vibes.”

Mediavilla wore two beaded necklaces — one purple and one blue — to show her connection to suicide.

Purple represented the loss of a relative or a friend and blue represented a supporter of suicide prevention.

“It’s really cool to see how people have a connection with suicide,” Mediavilla said. “People don’t just go up and be like I lost a friend or relative to this, but this is a way to see a small part of their story.”

Attendees wore necklaces of various colored beads, including white for a loss of a child, green for a personal struggle or attempt and orange for the loss of a sibling.

Baalman said seeing people come forward and be vulnerable was the most rewarding part of hosting the first Mental Wellness Week.

“It’s about the little victories,” Baalman said. “Even if this event helped just one person, then that means the world to me and I would call it a success.” 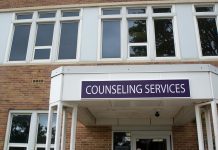 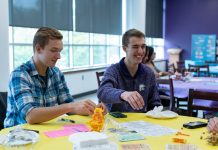