Some students spent their Thursday morning sleeping in, but Laken Horton spent her morning sneaking around campus and hiding a portion of 2,000 total eggs.

Hiding one bucket of eggs took Horton, junior in journalism, about an hour, with more time spent throughout the day hiding additional eggs.

“It didn’t take long for people to realize what we were doing,” Horton said. “I had a girl follow right behind me picking up every egg I hid, whether in a tree, on a window sill, or in a flower bed.”

The eggs were hidden as part of the Union Program Council’s annual Campus-Wide Egg Hunt, which UPC Community Committee co-chairs Siba Khojah, junior in political science, and Horton coordinated. Volunteers were recruited to hide the eggs early Thursday morning before students began their day on campus.

Most of the eggs were filled with candy—which were purchased in bulk online—but some students were lucky enough to find one of 20 grand prize eggs, which included an Amazon Fire Stick, Polaroid cameras, two hammocks, gift cards to various campus and K-State Student Union stores and two tickets to the Jon Bellion concert later this month at Bramlage Coliseum.

By the time Horton got to hide the grand prize eggs, she said she became paranoid, climbing on pillars and running to a window on the library and worried people would see her hiding the eggs.

“You would think someone would notice, but no one paid any attention,” Horton said.

Jessica Stangl, senior in veterinary medicine, said she found one of the grand prizes with her friend. The two had just gotten out of their 8 a.m. lecture when they went looking for the eggs and spotted one by a tree next to Trotter Hall.

“We were like little kids as soon as we found them,” Stangl said. “I think it was a really good idea.”

Kohjah said the Egg Hunt is a good event for UPC to hold in April with Easter approaching and warmer weather arriving.

“It’s such a fun activity to do with some friends,” Khojah said.

Along with Thursday’s egg hunt, Khojah and Horton also put on the first egg hunt of the spring for Manhattan’s community members last weekend.

“We had a lot of kids who were quite aggressive, jumping on top of each other,” Kohjah said. 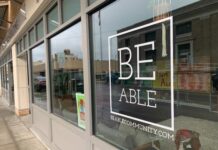