Editor’s note: To submit your club’s news, go to www.kstatecollegian.com/contact/submit-club-news/.

March for Science is a worldwide movement in defense of “the vital role science plays in our health, safety, economies, and governments.” K-State’s Physics Club will take part in this movement by hosting a march, which is open to the public, in Manhattan on Saturday. Marchers will meet at 12:30 p.m. on campus at the Quad in front of Cardwell Hall and the march will begin at 1 p.m. The end destination of the march is Sisters of Sound record store in Aggieville. The business will host a “Blinding U With Science!” event, where Physics Club has a timeslot for presentations and demonstrations from 2-2:30 p.m.

Audacity, Kansas State’s only all-female a cappella group, is holding its annual spring concert on April 30 at 7 p.m. in Forum Hall, located in the K-State Student Union. The group will perform a collection of upbeat songs, several of which will feature K-State’s all-male a cappella group, Cadence. Admission is free and the event is open to the public.

This event is open to entertainers of all kinds.

Listen Live to an old-time radio for a new age crowd.

Listen Live to KC band coming to play in our studio. 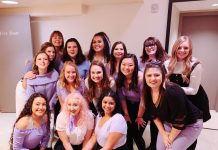