Editor’s note: This is the first in a series where editor-in-chief and graduating senior Jason Tidd writes about his experiences with crossing off items on his bucket list. The first is attending a live concert.

“I was wrong, please forgive me.”

The only full line of lyrics I could comprehend became my motto for the evening. In my first-ever live concert on Thursday night, the local band Philosophy of Lions taught me to not judge a band by its covers — or its first few songs of a set.

The four-piece band rocked a two-set, two-hour concert perched above Aggieville in Manhattan from the open-air lounge on the fifth floor of the Bluemont Hotel. The band is comprised of Taylor McFall on vocals/guitar, Nick Domoney on bass, Jen McFarlin on alto saxophone/vocals and Anu Milos on drums.

The heavy, gray cloud of smoke from Flint Hills controlled burns diffused the sunset. The limestone parapets of Nichols Hall on the south side of Kansas State’s campus peeked over the Beach Museum of Art.

Green, blooming foliage obscured the white “KS” of Kansas Hill across the Kansas River. The aroma of Varsity Donuts wafted up to blend into a sweet mix with tobacco and alcohol. The music attracted a mixed audience as middle-aged women sipped beers in the back and Arabic international students stood in front of the amps.

Below, at the intersection of Manhattan, Anderson and Bluemont avenues, the live music from bars and the attention-seeking roars of diesel trucks could not compete with the overpowering bass of Philosophy of Lions.

Neither could the guitar and vocals.

With no print or digital program or set list provided to the few-dozen come-and-go patrons, the band opened with an original piece. It featured overpowering bass, driving drums, lethargic sax, inaudible guitar and unintelligible lyrics.

The second number sounded exactly the same. So did the third. I never would have known they were playing different songs if they hadn’t said so.

I looked below at the Starbucks patio and the coffee-sippers with their heads cocked up toward the Bluemont lounge.

“Those poor people, having to hear this,” I thought to myself.

Then, I saw a man walk out of Starbucks, his long, black hair flying as he banged his head and jammed on air-guitar. I couldn’t hear his fake guitar, just like I couldn’t hear McFall’s real guitar.

As the band adjusted their audio levels and continued on with covers and originals, I was lost in thought.

I woke up from my daydream realizing this music was what I needed. It was perfect for reflecting on a rough week on the evening before the cap of it all: two papers and two exams due within the next 24 hours.

The bass was still loud, but it played a body movement-inducing rhythm. The guitar grew audible. The sax added smooth depth to the chords. The lyrics, while still unintelligible, were perfect in not distracting my thoughts.

The grunge, hard rock was what I needed to vent the bottled-up stress. I let the waves from the amps course through me, and I embraced it.

Then, I felt goosebumps.

After a seemingly endless string of originals and covers with an un-unique sound, I heard something special.

The song was the kind where you know it is something special from the first chord. With a softer guitar and vocal intro, the band introduced a new style to the concert. I forgot my assumptions that this band was one-dimensional.

It was 45 minutes into their first set, and I finally heard a song that gave the band a unique identity. The song’s title? “Identity.”

McFall freed his voice, displaying the very skills I assumed he lacked. The lyrics were still unintelligible, but this was the clearest they had been all night. For the first time, I heard passion sing forth from the saxophone as McFarlin broke into a musical sprint capped with a trill.

When drummers do their jobs well, they are hardly noticed. When they play poorly, they distract the audience from the performance — like an overzealous church praise band drummer.

Milos drove the band from the back seat at the drum set, leading the band through style transitions, musical buildups and tempo changes, while always blending with Domoney’s bass to form a unified base for the band. His one extended solo was exceptional, even if a tad long.

The band alternated between their alternative grunge rock sound and the softer style. The beat remained at a steady walking pace, except for on a couple songs featuring accelerandos.

Their heavy style was perfect for pent-up anger, but was hardly a go-to for anything else. The lyrics needed enunciation, and the singers rarely showed their vocal range and skills.

The guitar and vocals needed to be louder. The bass and drums would be perfect if they were turned down.

The sax reminded me of my own attempts at improvisation in high school jazz band: no more than five repetitive notes, mostly held out with sporadic note changes. But the band shined when the sax added an upbeat flair to the music instead of a background chord.

Their music needs polishing, otherwise it sound like a directionless, free-form jam session. Establish a style for a song while thinking small, then build around it.

In their first-ever two-hour concert, Philosophy of Lions created a cycle of excitement and disappointment. To capitalize on the excitement, the band needs to free the guitar, sax and vocalists to show their personalities and enunciate their words.

All the elements are there for this band to be something special, and I hope to see it succeed. 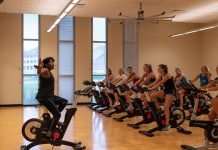