On Jan. 5, Quail Oil and Gas LC of Garden City, Kansas, filed an application to the Kansas Corporation Commission for an injection well, a device used for wastewater disposal and hydraulic fracturing (fracking), in Morris County, a mere 14 miles from the Tallgrass Prairie National Preserve.

The Emporia Gazette reported that a “pre-hearing conference” was held in late March as a result of more than 20 petition letters being filed to the Kansas Corporation Commission. The conference gave those who filed a petition letter a chance to testify against the injection well.

One of the residents who provided testimony at the conference, Sarah Uher expressed concern about the health consequences on her family and community in her petition letter.

“The health of my family and other residents of my community is my main concern,” Uher wrote. “We rely on well water, and science bears out that this will eventually contaminate not only that, but the rivers, creeks and ponds that we enjoy recreationally.”

Uher was likely referring to a 2015 study by the EPA that found “specific incidents” in which fracking “led to impacts on drinking water resources, including contamination of drinking water wells.”

What are those drinking wells contaminated with? Well that’s difficult to determine, as companies who engage in fracking are not required to publicly disclose all the chemicals used in the process by claiming they’re “trade secrets.”

Nonetheless, the Endocrine Disruption Exchange was able to attain and examine the toxicity of over 350 chemicals used in the fracking process. Their examinations revealed that “25 percent can cause cancer and mutations, 37 percent affect the endocrine system, 40 to 50 percent affect the brain, kidneys and nervous, immune, and cardiovascular systems and more than 75 percent affect the skin, eyes or other sensory organs.”

These results should be startling to anyone, as runoff is likely to occur, and when it does, those chemicals can have drastic effects on nearby residents and wildlife.

Other residents raised concerns about an increase in seismic activity that would ensue if the permit for the injection well passed, and based on what we’ve seen in Oklahoma, they’re 100 percent correct to be raising these concerns.

While studies by the United States Geological Survey and other groups indicate that “fracking is not causing most of the induced earthquakes,” environmental and civil engineers, geologists and earthquake researchers are quick to point out that wastewater disposal, a final stage in the fracking process, is linked to an increase in seismic activity.

In an article for Scientific American, Anna Kuchment explained how wastewater disposal can cause earthquakes.

The process involves pumping the fracking fluid (which contains those 350 plus chemicals) and “volumes of brine so salty it is hazardous … down a different hole drilled far below the shale into porous rock … As more and more fluid is injected into these wastewater wells, pressure can start to build up on deep geologic faults. Eventually one can slip, causing an earthquake.”

Protecting one of the last tallgrass prairie reserves

According to the National Park Service website, the Tallgrass Prairie National Preserve once spanned 170 million acres but is now 4 percent of that size. Along with being one of Kansas’ few natural landmarks, the preserve is one of few in the U.S. that “protects a nationally significant remnant of the once vast Tallgrass Prairie and its cultural resources.”

So with all the dangers injection wells pose — whether it be runoff of the 350-plus chemicals or an increase in seismic activity — why does allowing one near the dwindling Tallgrass Prairie National Preserve sound like a good idea? Because a company can make a profit at the expense of the environment and nearby residents’ health?

Well sorry, but some things should be off limits to companies, and drilling anywhere near a national preserve is one of them. 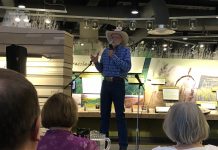 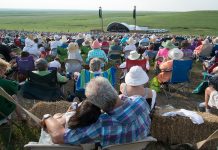 The Flint Hills are alive with the sound of music