According to popular legend, this number comes from the police code used by officers to report “marijuana smoking in progress,” although evidence does not support the legend. Today is the day many people decide to “light one up,” and with social views on cannabis dramatically changing, many students on campus will be participating.

When asked if weed should be legal, a Kansas State senior in family studies and human services said, “Yes, I don’t understand why alcohol is legal when weed isn’t.”

The student went on to explain that she felt much less reckless when high, compared to being drunk.

“My impulse control is much better than when I’m drunk,” she said.

A concern some people have, however, is how weed use can affect a student’s schoolwork and ability to learn and meet deadlines.

The student also went on to explain that she has seen people she knows “become lazy and drop out.”

Another student, a sophomore in anthropology, said the smell of the drug gives her a migraine.

When asked if she would participate in 4/20, the sophomore said, “Oh, god, no,” but also explained how she felt that alcohol and weed were “about the same.”

According to federal law, cannabis is a class-one drug, which is the same class as heroine.

When asked what they thought about this fact, the family studies major said she felt it was wrong, explaining that “you can’t overdose on weed.”

“I am a Christian and don’t think it’s very good,” Schiferl said. “I understand though, that people use it as a way to cope with stuff.”

The same anthropology major, choosing to remain anonymous, said, “If I actually did it, my head would explode. My brother did some very, very stupid things that he wouldn’t have done if he wasn’t high.”

Along with their opinions on marijuana’s classification, students were also asked if they considered it to be a gateway drug.

“I don’t think so with most people,” the family studies major said.

Now that more states have begun to legalize the drug, some students commented about how they could see marijuana becoming as casual as smoking a cigarette in public.

“Since states legalizing it happened really fast, I could see it being a normal thing,” Schiferl said.

According to the National Institute on Drug Abuse, a national survey found that over half of 18 to 25 year olds reported to have used marijuana at least once in their life.

Editor’s note: This story was updated to reflect that the legend behind the origin of the term 4/20. 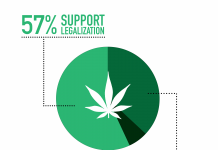