Bagpipes played “Amazing Grace” as the west side of the stadium filled with members of the military, residents of the Manhattan area and K-State students and faculty.

“Today we assemble to complete a project that was started in 1923, but was never completed because of the Great Depression,” said K-State President Richard Myers, a retired Air Force general and former chairman of the Joint Chiefs of Staff.

During the dedication, new signs that read “World War I Memorial Stadium” were unveiled at the southwest and southeast entrances.

“I think that this is fitting weather when you think about the individuals we are recognizing today and the really tough time they had during that period in the Great War,” Wiggins said. “On behalf of all of us who have been blessed to wear and dawn the uniform of this nation, I would like to thank Kansas State University for holding this dedication — a dedication that recognizes young men who, with the world at war, answered the call to serve.”

The ceremony ended with a wreath-laying in honor of Capt. William S. Comfort, the first of the 48 Kansas State College of Agriculture casualties during WWI.

Brig. Gen. Patrick D. Frank of the 1st Infantry Division at Fort Riley and retired Col. Mike McDermott laid the wreath in honor of Comfort and his acceptance into the League of Valor, which was championed by McDermott.

Jed Dunham, researcher and writer for the university’s Office of Military Affairs and founder of the 48 Fallen 48 Found Project, explained the project’s significance to K-State and its history.

“(The stories) were fascinating, and they were beautiful, they were sad and horrific and unbelievably American,” Dunham said. “For the first time, they give us a glimpse into the American experience into the World War. If there was one thing that the 48 fallen could give to us today, that they would tell us that our strength is in our unity.”

History of the 48 Fallen 48 Found project

The foundation of the stadium dedication came from Dunham’s 48 Fallen 48 Found project that began nearly three years ago, Myers said.

“This grassroots effort began three years ago as an advocacy project by the Friends of Memorial Stadium,” Myers said. “But it gained critical velocity as another K-State alum, Jed Dunham, visited K-State and stumbled upon a plaque that held the names of 48 students.”

Dunham was visiting K-State for a reunion when he took a picture of the plaque that honored the 48 students who gave their lives during WWI. After he returned to his home in New Hampshire, he looked back at the picture of the plaque and wanted to know more about what the students meant to the war and to the Manhattan community.

“I thought that a very simple search into the internet, to drop their names into Google and all my answers would be resolved,” Dunham said. “Nothing came back. They had disappeared. This did not sit well with me.”

After falling into the rabbit hole with the stories of the 48 fallen, Dunham reached out to to the university to see if there was an audience for this historical research. Connecting with the Office of Military Affairs and several university faculty and supporters, the project was finally presented to the K-State community.

“It was never my intention or my desire, or in my wildest dreams, to have this moment here today, but here we are,” Dunham said. “Keep believing.”

The project and a historical brief of Memorial Stadium will be on exhibit in the K-State Alumni Center until the end of the semester. 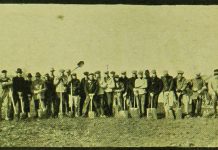 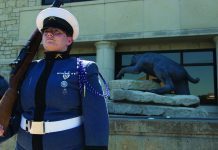 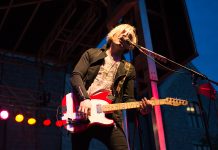