The concealed carry of handguns will be legal at Kansas public universities in a little over two months, but Kansas State’s administration has yet to launch a major effort to educate parents or current and prospective students about the state law implementation.

The University of Kansas has created a multi-page website to inform students on the topic of concealed carry, while K-State has not yet created a similar website.

KU’s concealed carry resource website provides information beyond the policy and statutory information displayed on K-State’s website. KU additionally supplies “a series of information pages tailored to specific audiences that provide a quick overview of the university’s policy,” a “Fast Facts” section that gives bullet point overviews of the law and university policy, FAQs specific to the university, a section with applicable resources and a “What To Do When…” page.

In November 2016, when he was announced as K-State president, Richard Myers said he was against the expiration of state universities’ exemption to the law.

“I’m on the record as believing that concealed carry on a university campus is not in the best interest of the folks on campus,” Myers said then. “That’s my stance.”

On Nov. 7, 2016 — a day before the elections — in an “Ask Me Live” session with the Collegian, Pat Bosco, vice president of student life and dean of students, said he thought students should consider the ramifications of the law before voting for state legislators.

“You know, I’m prohibited from expressing what I feel about the present law by the Board of Regents, so I’m going to violate that and say that the legislation that will be voted in this Tuesday will look at the law and give it a good look … and decide whether it’s right for Kansas schools to have concealed weapons,” Bosco said.

Developments over the spring 2017 semester

When asked in late February about plans to inform the campus of the revisions, Cindy Bontrager, vice president for administration and finance, said the Weapons Advisory Work Group was looking at increasing its efforts to share the policy changes closer to the July 1 implementation date.

Bontrager said on April 17 that apart from a single page for the group on the university’s web site, she was “not aware that there was disclosure of (K-State concealed carry policy), necessarily.”

Students and parents should expect to receive new information on how to report suspected policy violations, Bosco said in an April 18 email.

“We are going to include a concealed weapons FAQ in a hand-out for orientation and enrollment,” Bosco wrote.

Bosco said the university had planned to incorporate information about concealed carry on campus into the Alcohol and Sexual Assault Prevention Program that incoming students must complete, but the program developer has not completed the work.

K-State’s administration has refrained from referring to or detailing the policy change on its homepage or admissions webpages, with the bulk of the communications happening in 20 unique stories in the daily “K-State Today” email newsletter since the four-year exemption was granted in 2013, according to searches for “weapons” and “concealed carry” on the university website.

The most recent email referring to the change appeared in inboxes on Feb. 2, announcing a Legislative Review Session with the Office of Governmental Relations on topics such as the expiring weapons exemption.

Bontrager said she got pushback from others in the Weapons Advisory Work Group when suggesting more communication on the issue.

“They were like, ‘We don’t want this to be so in the media that this is all that folks are talking about,’” Bontrager said.

Bontrager said the university is trying to maintain enrollment and not “overshadow” what K-State offers “because this could be considered very negative.”

“Seventy is the estimated number of detectors that will be necessary to adequately cover all of the entrances to Bill Snyder Family Stadium,” Kenny Lannou, K-State associate athletic director for communications, said in an April 19 email interview. “Approximately 18-20 of these 70 portable units will also (be) utilized at Bramlage Coliseum.”

K-State Athletics, which is largely funded through private donations and game-related sales, strongly encourages fans to arrive early due to these security changes, Lannou said.

While the university is prohibited by law from requesting information from and maintaining registries of students who will carry concealed handguns, there were 11,851 non-international students who were at least 21 years old enrolled at K-State in the fall of 2016, making them eligible to carry concealed handguns, according to information provided from K-State’s Office of Planning and Analysis through an open records request. Spring 2017 enrollment numbers broken down by specific age are not currently available.

In the residence halls, 349 — or about 10 percent — of the 3,446 students who call K-State’s residence halls home for the spring 2017 semester are 21 or older, Nick Lander, interim associate director of K-State Housing and Dining Services, said in a phone interview.

When not carried, firearms will need to be kept in a locked car or in storage devices supplied by the owner and approved by the university administration in on-campus housing, according to K-State’s revised weapons policy.

The Kansas Regents suggest in a Jan. 18 FAQ on concealed carry policy that housing applicants who are uncomfortable sharing a room with a handgun owner alert Housing and Dining Services.

A combined 72 percent of K-State faculty and staff who participated in a Jan. 2016 Docking Institute survey and a combined 62 percent of K-State students who participated in a similar survey that month said they would prefer guns not be allowed on campus, or would approve of the expiring four-year exemption for universities from concealed carry be extended.

Ambiguity as to concealed carry’s effect on recruitment and retention

“It’s difficult to track all the reasons students decline our offers of admission to the M.A. program in English,” said Anne Longmuir, associate professor and director of graduate studies in K-State’s English department, referring to a prospective graduate student who declined an offer from the English department the day before.

“This year, however, I have noticed an increase in the number of students citing personal reasons,” Longmuir said. “We can’t know whether all those students were referring obliquely to campus carry, but it is the reason that yesterday’s student cited.”

Daniel Hunt, associate professor of sculpture, is retiring, but he said the implementation of campus concealed carry had no influence on his decision to retire.

“If you think that guns are not already on campus, you are fooling yourself,” Hunt said. 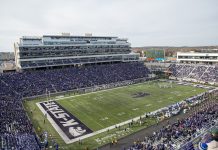