Editor’s note: To submit your club’s news, go to www.kstatecollegian.com/contact/submit-club-news/.

K-State’s Transfer Ambassador Program is now accepting applications for our 2017-18 school year membership. Multiple leadership roles, including treasurer, multi-media chair, events chair, president and vice president, are available for application. Contact them via their Facebook page or through the club’s email: transfer2ksu@ksu.edu.

The KSU/Fort Riley men’s rugby team participated in a nationals qualifying tournament, where the champion advanced Saturday. The group played everyone in the HOA conference, including Kansas, Nebraska, Iowa State, Missouri, Truman State, Washington University and Oklahoma State. They went 5-0 in the tournament, beating Washington University 48-0, Nebraska 34-0, Iowa State 40-5, Kansas in the semi-final 40-0 and Missouri in the final 10-7. The win over Missouri came late in the game, giving the team the edge in the tournament to qualify for national 7’s. Nationals will be held in Glendale, Colorado, May 19-21. 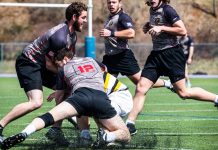 Playing rough: An inside look at the K-State men’s rugby team