A student committee approved up to a 3 percent increase in tuition for fall 2017 in a special 7 a.m. meeting on Thursday.

The Tuition and Fees Strategies Committee recommended that tuition increase by no more than 3 percent. The recommendation goes to President Richard Myers, who then takes any tuition increase proposal to the Kansas Board of Regents.

Every 1 percent of tuition increase brings in about $1.7 million to the university.

“People need to understand that when the state gives us money, we can bring tuition down,” Bontrager said. “When the state cuts us money, it impacts tuition: it goes up. And I think that’s the important message that we are really trying to get out to families is that what happens in Topeka affects us directly. It affects our pockets.”

The Kansas Legislature has yet to pass a budget for the next fiscal year.

“Having no tuition increases, as much as Bosco would love to say that … we’re not going to be able to pay our bills and keep things going … with a zero percent increase in tuition,” Bosco said.

McGee was the only student who voted against the 3 percent tuition increase cap. Gutman was absent.

“Remember that for the lower tuition is, the more that the programs that students come here for will probably be cut,” Van Ranken said.

“Looking around the room, I’m the only sophomore here,” Valdez said. “This impacts more to me because I’m here for a little bit longer than you guys have.”

Bontrager said other state universities are currently considering 3 to 4 percent tuition increases. Kansas State would only consider a 5 percent increase if there were a state funding cut.

“If we don’t get a state cut, there’s no way I think the president would support a 5 percent (tuition increase), nor would the Board accept,” Bontrager said.

Jackson said if the higher 5 percent tuition increase were needed because of a state budget cut, increases in scholarship funding should not come from the tuition increase.

“I like the idea of the needs-based scholarship, but I also see it’s still increasing tuition, so then we’re basically going to be using that increase to charge $500 and here’s $250 back of it,” Jackson said. “It’s basically taking it out of one pocket and putting it into the other.”

Trenton Kennedy, sophomore in entrepreneurship, a non-voting member of the committee and a former student body vice president, said some students are in a better position than others to afford tuition increases without corresponding increases in financial aid.

“Because of the very diverse population at K-State, there are a lot of students I feel like who can afford up to a 5 percent increase in tuition and maybe won’t even pay attention to it or blink an eye,” Kennedy said. “And I think there are students like me, candidly, a Pell Grant recipient, where if tuition goes up 5 percent next year, my Pell Grant isn’t going up at all.”

The Board of Regents in December approved a 2.1 percent increase in housing and dining services at K-State. There is no increase in the student privilege fee for fall 2017.

The committee recommended the university prioritize improvements to employee compensation packages, which were included on a list of planned uses for additional tuition revenues. Portions of the money would go to a 1 percent cost-of-living salary increase and to increasing the salaries of some employees who are more than 25 percent below the market compensation.

“The compensation and cost-of-living adjustment I feel like is really important to the morale of the people who do so much for our university,” Kennedy said.

While base salaries remain the same without cost-of-living raises, employees have less take-home pay because of increases in employer and employee contributions to benefits programs, such as the Kansas Public Employees Retirement System.

Bontrager said the cost of living adjustment is one of Myers’ priorities.

“The president has been very clear that he really wants to do something for university employees,” Bontrager said.

Board of Regents grants K-State smallest tuition increase in Kansas 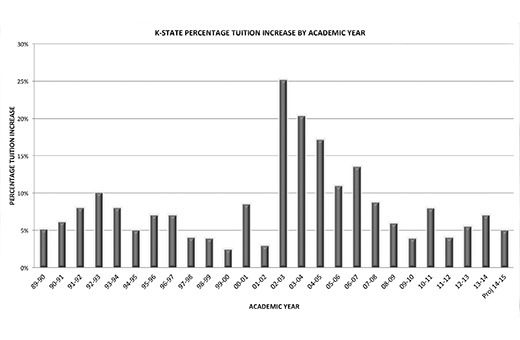