Another year of K-State sports has come and mostly gone, save a few spring sports still competing. In honor of the school year’s ending, the Collegian sports desk took a look back at some highs and lows of the past year, as well as team, coach and player of the year.

Team of the year: K-State football

This may be the cop-out answer, but when looking back at the year, the football team stood out the most. The Wildcats started off slow but improved steadily throughout the season in typical Snyder fashion.

K-State started off the season with a loss at Stanford and struggled at times to a 5-4 record and 3-3 Big 12 record. After the fourth loss, the Wildcats were able to string together some wins thanks to a strong running game behind the emergence of then redshirt freshman running back Alex Barnes.

The Wildcats won their final three games of the season and earned a bid to the Texas Bowl where they took down Texas A&M.

“I think it’s the perfect ending for this team,” senior safety Dante Barnett said after the win. “With all we’ve been through with last season and starting off this season (and) the fight that this team had; it was the perfect way to end the season.”

Coach of the year: Jeff Mittie

Yes I know, Jeff Mittie is not Bill Snyder. But Mittie’s success leading the women’s basketball team should not be ignored.

The Wildcats won 23 games, the most in a season for the team since the 2008-09 season. They have improved each year under Mittie with this past season being his best yet.

K-State finished fourth in the Big 12, was consistently ranked in the Top 25 all season and made it the second round of the NCAA tournament for the second year straight.

Player of the year: Katie Brand

To put it simply, Brand was one of the best players in Wildcat volleyball history. The senior setter earned AVCA third team All-America honors in her final season in a Wildcat uniform, the first K-State All-American since 2008.

Brand is second all-time at K-State for career assists with 4,743, second in career double-doubles with 67 and is one of three Wildcats since 2001 with multiple 1,200-assist seasons.

She helped the Wildcats earn a seed and the right to host the opening rounds of the NCAA tournament in her final season. 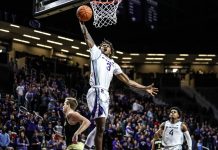 Wildcats prepare for final road match of the season