June 28, 2017, 6:15 p.m. – 8:15 p.m. at Manhattan Public Library.
Allana Saenger Parker, curator of the Riley County Historical Society, will discuss the history of the Eureka Lake area, which includes a resort, an orphanage, amusement park and most recently, the Flint Hills Jobs Corps. This presentation ties into the Riley County Historical Society’s exhibit, “Celebrating 100 Years of History and Heritage.”

Acoustics in the Amphitheater

June 29, 2017, 9 p.m. – 11 p.m. at Auntie Mae’s Parlor
A local three-member rock band is performing for its extended play record release party. Attend the event to meet the band members, grab a copy of the album and possibly get it signed.

Arts in the Park: The Hunts

June 30 – July 4, 2017 at Heritage Park in Junction City, Kansas.
This five-day Independence Day festival includes a carnival, car show, live music and entertainment, food and other vendors and a parade, and the festival concludes with a firework display on July 4. 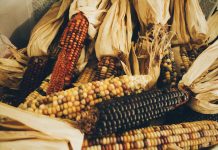 Monster Mash: Your October guide to events around Manhattan