Kansas State University is home to a rare type of flower, Amorphophallus titanum, also known as titan arum but more commonly referred to as the corpse flower. The corpse flower bloomed for the first time in 15 years in a greenhouse at K-State June 27.

“Amorphophallus titanum, discovered in 1878 by Italian botanist Odoardo Beccari, is native to Sumatra, Indonesia,” Lea Westervelt, greenhouse manager and research associate for the Department of Horticulture and Natural Resources, said.

The corpse flower derives its nickname from the unique odor released during the blooming process. The smell is known to resemble the stench of a dead animal or a human cadaver.

According to a K-State Research and Extension News June 21 press release, the flower was planted more than 15 years ago by former faculty members Ken and Janet Schroeder.

“This plant shows the diversity and complexity of plants for our students,” Westervelt said. “Having this plant also can contribute to the international effort to protect the Amorphophallus titanum, which is vulnerable to the point of being endangered due to habitat destruction.”

The corpse flower began blooming June 27 in the late afternoon. The typical blooming process lasts between 24 and 48 hours.

“The blooming was captured with time-lapse photography by Dan Donnert of the College of Agriculture Research and Extension News Media Services, and they were key in getting the information to the public that the flowering was happening,” Westervelt said.

The blooming of the flower was also captured through daily Facebook updates and a live feed provided by Chad Miller, associate professor of landscape horticulture.

“I was really excited for it to bloom,” said Emma Brooks, sophomore in horticulture production. “Everyone around here was waiting for it. There was a really big buildup, and there were several days where they thought, ‘Oh, today’s the day.’ It was a waiting game for sure.”

Westervelt said the flower is known to grow up to 12 feet tall in its natural habitat. The mother plant of the corpse flower at K-State has a full bloom of 8 feet and 5 inches tall.

“The magic of the titan arum flower comes from its great size,” Westervelt said. “It is the largest unbranched inflorescence in the plant kingdom.”

Westervelt said continuous conservation efforts are being made for this plant.

This year, other sightings of blooming corpse flowers were captured around the world in Australia, Canada, China, England, the Nebraska Lauritzen Gardens, the Chicago Botanic Garden and four different locations in California.

“Prior to the year 2000, fewer than 50 blooms had been recorded in over a century of cultivation,” Westervelt said.

Westervelt said there is a tradition of naming each of the blooms that occur at K-State due to its rarity. However, the corpse flower has not yet been officially named. 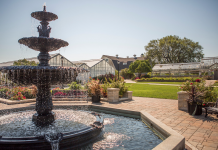 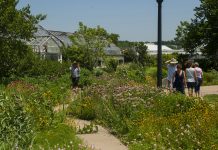 Gardens in Manhattan raise funds for Gardens at K-State

Gardens in Manhattan raise funds for Gardens at K-State