The Kansas State University administration reaffirmed the university’s commitment to freedom of speech in a statement emailed to students Thursday morning.

The statement particularly singles out speech which may be considered offensive, stating that “it is not the proper role of the University to attempt to shield individuals from ideas and opinions they find unwelcome, disagreeable, or even deeply offensive.”

“Although the University greatly values civility, and although all members of the University community share in the responsibility for maintaining a climate of mutual respect, concerns about civility and mutual respect can never be used as a justification for closing off discussion of ideas, however offensive or disagreeable those ideas may be to some members of our community,” the statement continued.

However, the university reserved the right to restrict speech that “violates the law, that falsely defames a specific individual, that constitutes a genuine threat or unlawful discrimination, or that unjustifiably invades substantial privacy or confidentiality interests.”

The statement was made less than a week after a couple of sexually suggestive signs on private property along Poyntz and Bluemont Avenues — two of Manhattan’s busiest streets —caused an uproar on social media on Aug. 19. In that instance, the university released a statement that called the signs “inappropriate” without specifically condemning them, as well as reminding students to follow the university’s Principles of Community.

Jeffery Morris, vice president of communications and marketing, said the statement on free speech has been in the works since last year.

“The impetus was we had several incidents where people would come out and somebody would publish something or say something, and there would be this furor on campus about what people had said or this offensive thing this group did or another group, and it was happening with regularity,” Morris said. “We wanted to have a statement out there that basically says, ‘Here’s how the university supports and believes in free speech.'”

“I think the statement is designed to help educate, because we continue to find people misinterpret the rights of free speech,” Morris said. “As a state institution, we have to uphold the constitution … What we’re trying to get is a more civil discourse and dialogue about these issues.”

Taylor Hagge, sophomore in elementary education, said the university must protect freedom of speech on campus.

“You should be able to say whatever you feel like, because we live in a country where we are given the right to say what we want, within reason,” Hagge said. “I think the university should do everything they can to give us freedom of speech.” 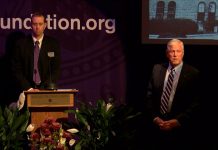 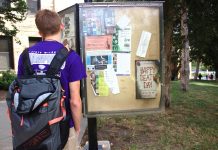