Hurricane Harvey continues to bring devastation to southeast Texas, with floods spreading to neighboring states. The National Weather Service predicts the rains to continue. Rainfall totals in some areas have surpassed 50 inches, making Harvey the greatest rainstorm in U.S. history since Tropical Storm Amelia hit Texas in 1978. Tens of thousands have evacuated their homes, and ABC News reported Tuesday that at least 1,000 people are waiting for rescue in Houston alone. As of Tuesday afternoon, the death toll stood at 15 confirmed fatalities.

North Korea fired a missile into Japanese airspace early Tuesday morning. According to CBS News, the ballistic missile flew over northern Japan before landing harmlessly in the Pacific Ocean, 650 nautical miles from the island of Hokkaido. The launch is believed to be in response to continued joint military exercises between the United States and South Korea. A White House statement issued on Tuesday said that “all options are on the table” for responding to North Korea’s perceived threat.

Danny Duffy, pitcher for the Kansas City Royals, was cited and arrested with a DUI Sunday in Overland Park, Kansas. According to the Kansas City Star, the incident took place at a Burger King near the intersection of 137th Street and Metcalf Avenue around 8 p.m. The Royals lost 12-0 in Cleveland that same day, but Duffy was not present. He is on the 10-day disabled list with a “low grade pronator strain” in his left arm. His first municipal court appearance is Sept. 19.

Kite’s Bar and Grill is on sale for the third time in two years. The Manhattan Mercury reported that Rusty Wilson, the restaurant’s current owner, first sold the establishment to Hill Management Group in 2015 before re-acquiring it 14 months ago. Wilson is now accepting sealed bids through Belinda Snyder, the former owner of Aggieville’s Shear Dynamics. Kite’s is expected to be sold sometime in October. 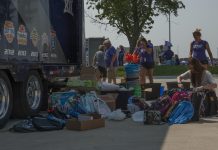