This Saturday is the 2017-2018 season opener for the Kansas State Wildcats, where they will host the University of Central Arkansas Bears at home in Bill Snyder Family Stadium.

During a press conference on Tuesday, head coach Bill Snyder spoke highly of his team for the opening game.

“We always want to play as well as we possibly can,” Snyder said. “Everybody talks about finishing, finishing, finishing, and I believe in that. You have to be well conditioned and physically strong enough and mentally tough enough to finish ball games. It is equally as important to me that we start well. Coming out of the locker room – whether it is the special teams unit, kickoff return, kickoff, or defense – getting off to a good start is important.”

“It is important to play extremely well, and obviously we want to play well all the way through,” Synder continued. “We talked to our players about the first five minutes of the first quarter and the second half is just as significant as the course of the ball game.”

Snyder also mentioned that he was happy with the team’s practice performance over the summer.

“They have their hands full doing what they are doing and they go about their business,” Snyder said. “I have been pleased with how we are practicing. I think they are into it. They have been giving me the impression that they have not taken anything for granted. We are still working toward that daily improvement that we chat about all the time.”

After talking about the game, Snyder announced the K-State Athletic Department would be taking steps to help the victims of Hurricane Harvey. The department is working with the United Way in Baytown, Texas, to collect relief items.

Items that are being asked for include cleaning supplies, new or unused children’s clothing, school supplies and kid’s backpacks, according to a release from K-State Sports that went up Thursday. 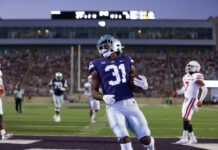 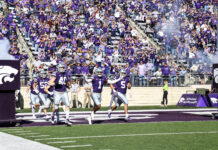 K-State suffers its first loss in the season