Home Featured Home Wildcats win against the Bears, ready to take on the 49ers

The 2017 season for the Kansas State football team came off to a great start, when they slammed the University of Central Arkansas Bears in a 55-19 finish. Multiple players stood out for the season opener, including junior D.J. Reed and senior Jesse Ertz.

Reed began to set the speed of the game, when he completed a 96-yard opening kickoff return in the first two minutes. Sophomore Alex Barnes ran it in for the first touchdown of the game.

“I was pleased with D.J. I would have liked for his conditioning to have been better, but that is my fault, not his,” Snyder said. “We will make up for that on Monday and Tuesday of next week. He played very well. I was pleased with what he did.”

Junior Byron Pringle came on the record and said that Reed was not afraid to do that, as he does it during practice sessions.

Coach Snyder was pleased with Ertz’s throwing arm during the game against the Bears.

“We want him to throw the ball whether it is the underneath ball or the deep ball,” Snyder said. “It kind of depends on what they give you. We still went in with the idea that we wanted to be balanced. That is not going to change.”

Going into this week’s game against the University of North Carolina at Charlotte, Snyder also spoke frankly about what the Wildcats need to work on.

“It became obvious after a while that we were not running the ball extremely well and we needed to throw it,” Snyder said. “Some of the bootleg type plays and misdirected passes were something we had difficulty with. … I do not want us to have that kind of difficulty.”

Snyder also touched base on Charlotte’s offense and defense.

“From a defensive standpoint, they are a physical team up front,” Snyder said. “They have athletic players in the back end that can get up and press on your wide receivers. They have a physical secondary in that respect. Schematically, they are sound. They are a bigger blitz team than what we have seen.

“From an offensive standpoint, I like the progress that they have made with their offensive line,” Snyder continued. “They have a mobile offensive line that runs well. They have a good running back that can run downhill well, but the key to their offense is the quarterback. He is very talented.”

Going into their next game, K-State is ranked 19th in the Associated Press Top 25 and the Amway Coaches Poll. The game will begin at 11 a.m. in Bill Snyder Family Stadium. 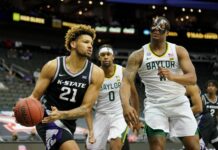