This summer, members of the Kansas State staff, along with support from students, went to Washington, D.C. to protest the vote to repeal the Affordable Care Act. In an act of civil disobedience, Jessica Kerr and Brandon Irwin, K-State faculty, were arrested protesting the vote outside U.S. senator’s offices.

“When you feel this issue is not getting the coverage, or that people aren’t talking about it on the level that they should, your options are limited there,” Irwin, assistant professor in kinesiology, said. “Civil disobedience, or other kinds of activism, is the next option.”

While the GOP is working to repeal and reform the ACA, Kansas Senator Jerry Moran is for the repeal but voted no this summer on the Better Care Reconciliation Act (BCRA), according to NPR. On the other hand, Kansas Senator Pat Roberts voted yes for repeal.

The vote ended with an ultimate “no” to reforming ACA with BCRA. This would have left 22 million more uninsured by 2026 than the current heath care act, according to Congressional Budget Office.

The process of getting to Washington started with Garrett Wilkinson, senior in nutritional sciences and microbiology, who was in East Africa at the time. Wilkinsonstarted making calls when he heard that Kansas representation was essential in getting senators’ attention in Washington to protest the repeal of ACA.

Wilkinson was moved to action and started making calls to anyone he thought would be willing to go to Washington and speak out against the repeal.

“I called everyone I could think of in Kansas that I knew who would be willing to do this; Jess and Brandon … were two of the most enthusiastic yeses.” Wilkinson said.

Irwin said that they broadcast this whole experience on social media, using a GoFundMe to support them in travel and lodging. People in Manhattan and all over the country donated to help while watching on their Facebook page “Living and Dying in Kansas“ as things unfolded.

Kerr, advisor in education, said when considering what kind of society in which she would want to live, that thought is just a point of entry into the world of activism and speaking out.

“It’s important for us to remember that the things that politicians say are not the ideas of a society,” Kerr said. “We are able to create those ideas together and in solidarity of something that’s better. Ultimately if we do that … the responses of the politicians in power will turn to meet the people’s demands.”

The two faculty members, along with others, were protesting outside each of the Kansas senators’ offices when they were arrested under a civil disobedience charge. They were given citations and fined $50, which had been raised ahead of time by the national organizers.

“In the end, getting arrested was basically less than a parking ticket.” Irwin said.

Brennan Flanagan, senior in secondary education, said we have a school system that silences the individuality and voice of students and teachers.

“So it’s good they are stepping outside of the institution of the school system and being a leader in responsible protesting,” Flanagan said.

A team at K-State — including Kerr, Irwin and Wilkinson — is working to put together a podcast to campaign for the marginalized and vulnerable population in Manhattan, capturing their voice and sharing it with the rest of the community.

“When it comes to human rights, it is very important to be active because if you are passive about it, it can be easily swept under the rug,” Flanagan said. 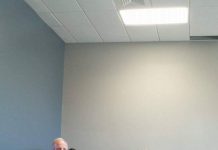