“In the next 40 years, we have to produce as much food as we have in the last 8,000,” Jason Clay, senior vice president of markets and food at the World Wildlife Fund, said in the fourth edition of the Gardiner Lecture Series. The lecture was held in McCain Auditorium on Monday at 7 p.m.

In his lecture focusing on food sustainability, Clay said that if we are to feed the world, we must think about the issue from a global perspective. The Earth only has so much land, and converting habitat to farmland for food production is the number one threat to biodiversity, Clay said. To solve the farmland real estate shortage, Clay suggested intensifying the food grown in already available areas, producing more with less.

For example, one liter of water is currently equal to one calorie of food, Clay said. By 2050, when the world’s population will reach 9 billion, we will need to produce two calories from half a liter, as rising incomes will allow people to consume twice as much as they do currently.

A second example is provided by calorie variations, Clay said. One acre of corn grown in Iowa produces 5 percent of the calories that an acre of bananas grown in Costa Rica produces, and those bananas produce one-third as many calories as an acre of sugarcane in Brazil. Clay proposed a solution to these calorie deficiencies: genetic modification.

“It’s not a question of ‘if’ genetics, but ‘which’ genetics,” Clay said. “Why can’t we, with the new technology we have, figure out a way to put more nutrients into bananas? Can we put proteins into sugarcane?”

For some students, hearing a possible solution to problems concerning food sustainability was a pleasant surprise.

“I think we focus too much on defining the problems rather than identifying the solutions,” Christine Rock, senior in food science and industry, said. “He did a great job of providing examples of solutions to those established problems.”

Clay also suggested a starting point to go with his solution.

“Nobody can do everything, but everybody can do something,” Clay said. “Start with waste; figure out how you’re using it and go from there.”

Other students appreciated Clay’s global perspective on these issues.

“I think in Kansas and the Midwest, we don’t often think about things on a global scale,” Kennedy Hackerott, sophomore in anthropology, said. “I like how he tied us in [by saying how we could help].” 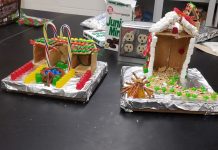 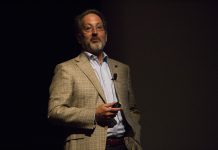