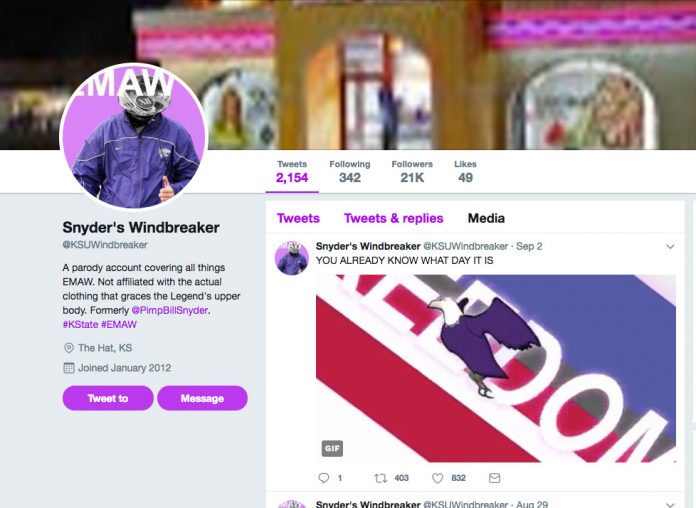 Bearing the name of Kansas State’s head football coach and the unmistakable game day attire that “graces the Legend’s upper body,” Snyder’s Windbreaker is a self-described parody account that covers all things EMAW. The account has been active on Twitter @KSUWindbreaker since January 2012.

Reaching the phones and laptops of over 20,900 K-State fans, Snyder’s Windbreaker calls “The Hat, KS” home on his Twitter profile.

Now a business development manager at a company based out of Overland Park, Kansas, the K-State alumnus graduated in December 2015 with a degree in marketing and a minor in leadership studies.

Snyder’s Windbreaker decided to remain anonymous in order to maintain a professional environment in his career.

The parody tweeter said he created the account his freshman year after seeing similar accounts for other teams and schools, but not for K-State.

“I thought I would just get a couple thousand followers, that was my initial goal,” he said. “There just wasn’t really anything like it at K-State, so I figured I would draw a few followers just from that.”

“When I first started out, I was focused on growing into a decent following, and I was really focused on hitting daily goals I set for myself of getting a certain number of retweets or getting a certain amount of followers,” he said. “Eventually it just kind of snowballed, and I stopped caring about that.”

According to his private Twitter analytics, the account earned 767,600 impressions, garnered 3,600 retweets, collected 13,700 likes and averaged a 2.7 percent engagement rate in the last 28 days.

Alec Butenas, senior in kinesiology, said sports parody accounts are practically all he follows on Twitter.

“It’s the memes … that make sports so much more fun,” Butenas said. “You can send your friends a picture of what [the accounts] said. I think with the Windbreaker account, it’s doing that exact thing.”

Attempting to parody the “soft-spoken Bill,” the initial name of the Snyder’s Windbreaker account was Pimp Bill Snyder, the tweeter said. However, after a Big 12 Football Media Day his sophomore year, his username was called into question.

“Someone had casually asked Snyder, ‘Hey, there’s someone kind of impersonating you online, do you have any thoughts about that,’ and I don’t think Snyder really understood the account at all, but he was just like, ‘I’d appreciate if anyone was impersonating me they would stop that,’” Snyder’s Windbreaker said.

He said his phone “blew up” one night while he was eating dinner when followers asked him what he was going to do about Snyder’s request.

“I couldn’t really ignore that or say no to Bill,” he said. “I also had some of the local sports writers reach out to me and the general agreement was [to switch] over to ‘Snyder’s Windbreaker’ and not necessarily say I’m directly Bill Snyder. Just transitioning from there, it seems to have gone well. I haven’t heard anything from Athletics, and I’d like to keep it that way.”

Snyder’s Windbreaker said in the early days of the account when it plateaued at around 400 followers, Tysyn Hartman — a 2012 K-State graduate and former football player — quoted one of his tweets.

“He said something like, ‘Hey, if you’re not following this account, you need to be following this guy,’” Snyder’s Windbreaker said. “I doubled my followers basically after that, and that’s when it really started kicking into gear.”

Riley Gates, head staff writer for GoPowercat.com, said he thinks it is more likely for college students to follow parody accounts than actual sports writers and publications that cover games on social media.

“Not that having someone follow us on Twitter is super important to our coverage, but it just shows what a certain age group is looking for when they go to Twitter during a game,” Gates said. “I follow so many professional accounts for work that it’s nice for me to have a good laugh every now and then when I’m scrolling through my tweets at a timeout.”

Today, instead of curating content and setting goals, Snyder’s Windbreaker said he just “shoots from the hip,” focusing more on having fun with the account.

Although he has amassed over 20,000 Twitter followers, the parody tweeter said he does not have much interest in tweeting sponsored content.

“It’s kind of toeing a fine line … I feel like I could always receive a cease and desist because I’m basically using Bill Snyder’s likeness,” he said. “So

has never really been something on my mind, because again, I just don’t really take it that seriously. Making money off of it isn’t really worth it to do just completely sponsored content.”

When reminiscing on one of his favorite tweets, he thinks back to the 2012 loss to Baylor that elicited a succinct tweet: “Well, f***.”

“I feel like I actually tweet better when I’m just melting down,” Snyder’s Windbreaker said. “I want to say I got about 500 retweets off that. It was a funny one, but that was a real low point. Now it’s kind of funny in hindsight.”

Snyder’s Windbreaker said follower interaction will always vary, but making light of situations or taking a more comedic approach to whatever is going on with K-State Athletics will get good results.

“There is definitely a direct correlation to how good the team is doing and how many retweets I’ll get,” he said. “When things are rolling and I’m tweeting funny stuff that is supportive and positive, those are going to do a lot better than after a loss when you’re like, ‘Well, I’m just going to go drink some bleach or something.’”

“I like Snyder’s Windbreaker,” Gates said. “Now, I thought it was better a few years ago when it was @PimpBillSnyder, but it still has some quality tweets. I can’t say I follow it incredibly close, but when I see the account tweet, I can always count on a good laugh.”

The parody tweeter said he decided years ago that he would make a habit of looking at his mentions.

“I occasionally peruse there, but you’ll always find some not-so-great comments,” Snyder’s Windbreaker said. “That usually is from insulting other teams like KU or something, but every fan base is going to have dumb people on Twitter.”

From a marketing standpoint, there are a lot of people within the K-State Twitter community who are really good at tweeting, who use their normal names, but they are going to hit that limit of how many followers they have because people don’t want to follow a generic account, Snyder’s Windbreaker said.

“When you create an account and you specifically lay out that this account is for K-State humor and K-State updates, stuff like that, people are going to be more inclined to follow that,” he said. “With all the reporters and professional sites out there, people just want a comedic take on things. They want more lighthearted content.”

Though his content sometimes warrants negative comments from opposing teams’ fans, the parody tweeter said he would not tweet anything on Snyder’s Windbreaker that he would be embarrassed to tweet from his personal account.

“I just don’t really see any benefit from people knowing that I run that account,” he said. “I work with a lot of KU fans, so … that would be an awkward day in the office.”