The Kansas State volleyball team went 2-1 this past weekend with a huge five-set win over Northern Iowa in the final match on Saturday.

The team started off the invitational in Omaha with a win over the University of Nebraska Omaha Mavericks on Thursday night in a match the Wildcats dominated.

It was a different story on Friday, as K-State lost in straight sets to No. 10 ranked University of Nebraska-Lincoln.

“I thought we stayed relatively composed and did some nice things early in the match,” head coach Suzie Fritz said to K-State Sports. “When we were in good situations I thought we were really good. I think our block is getting better; we are starting to get more productive touches at the net.”

K-State junior Kylee Zumach finished with a team high 10 kills and hit at almost .300 in the losing effort. On the other side of the net, the Cornhuskers hit .323 and finished with 51 digs and 47 kills. In the last two sets of the match, they held the Wildcats’ hits under .100.

“We broke down in serve-receive,” Fritz said. “So then everything changed a little bit for us. I thought [Nebraska] served very strategically and really made some people work.”

In the final match on Saturday, the Wildcats came up with a win over the University of Northern Iowa Panthers.

K-State stepped up when it needed to in the fifth set and won 15-6 in a highly competitive contest.

“Gritty,” Fritz said. “Coach [Trent] Sorensen said late in the match that this one is going to come down to who wants it more. Northern Iowa was in a situation where it had to play multiple games today and had to go back-to-back. But we are in a situation where we were in our seventh match in 10 days, so everybody’s grinding at this point.”

Zumach led the team with 17 kills while senior Bryna Vogel had 15, junior Alyssa Schultejans finished with 12 and freshman Peyton Williams had 10.

The Wildcats are now 7-6 going into conference play as they travel to Oklahoma to play the University of Oklahoma Sooners on Wednesday night. 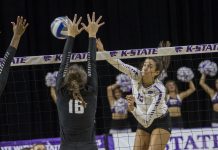 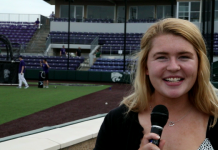 WATCH: As the Wildcats take on Omaha, here’s what you need to know