The Kansas State volleyball team will begin the Big 12 portion of its schedule tonight as it travels to Norman, Oklahoma, to take on the University of Oklahoma Sooners inside McCasland Field House at 7 p.m.

The Wildcats are winners of their last five of seven matches going into the conference opener and are 7-6. K-State head coach Suzie Fritz has never gone into the Big 12 schedule with a record under .500.

Another main reason for the Wildcats’ success lately has been the play of junior Kylee Zumach, who has had double digits in kills in every game except for one this season, which already matches her total from the 2016 season.

The middle blockers — junior Macy Flowers, sophomore Elle Sandbothe and freshman Peyton Williams — have really stepped up for the Wildcats as of late, leading the Wildcats in blocks this past weekend.

Those three combined for 20 blocks in three matches this past weekend in Nebraska, and Sandbothe had six in a win against Northern Iowa.

On the other side of the net on Wednesday will be the 3-9 Oklahoma Sooners, who have struggled this season so far.

The three wins by the Sooners this season have come against Northwestern State, Nicholls and Southern Mississippi. They open at home against the Wildcats before playing three straight road matches against Iowa State, the University of North Texas and Baylor.

K-State has dominated this series lately, as they swept the Sooners twice last season and have won six of the last seven meetings.

The next time these two teams meet will be Nov. 18 inside Ahearn Field House with first serve set for 7 p.m. 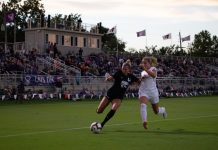 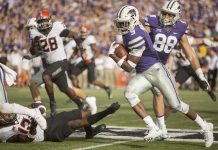 Football team will look for sixth win at Oklahoma State