Out of the roughly 24,000 students who attend Kansas State, only a small percentage are military-connected or are veterans. This group of people is comprised of mostly non-traditional students who are going to school for their bachelor’s degree after the conventional college age.

The Veterans Center at K-State, founded in 2011, is a place in the Student Union for these non-traditional students and other traditional students to be in a military-friendly atmosphere where students can connect with one another, network within the community and learn to succeed in the civilian world, Dominic Barnes, Military Student Services coordinator, said.

“Our mission is to be an advocate across campus, to raise awareness about military-connected student issues and to be a part of a broader network for the community,” Barnes said.

The Veteran Center has computers, graphing calculators and other physical studying resources students can utilize.

In the Veteran Center community, it is common for students to tutor one another to help others better understand subjects.

“Students helping students is what that’s all about,” Robert Landry, graduate student in business administration and research assistant at the Veterans Center, said.

There is also the social aspect outside of regular schoolwork, which allows students to get connected and feel like they belong somewhere, said Felix Jimenez, sophomore in business administration and president of the Veteran Student Organization.

“You will have somebody there that pretty much has done what you’re going through,” Jimenez said.

The VSO, separate from the Veterans Center, is an organization at K-State that helps students, their spouses and even their children find jobs at no cost. The organization also gives students opportunities to volunteer and provides access to resources throughout campus.

“Our biggest problem isn’t necessarily navigating college, but it is the other aspect that as non-traditional we’re a little bit older, we’re married, we have children and we have jobs other than just school,” Jimenez said.

This helps many of the roughly 148 current members of VSO who utilize the Veterans Center.

“I just started because I didn’t want anyone to have to go through the hassle that I went through when I got here,” Justin Manford, graduate student in public administration and founder of the VSO, said.

The Veterans Center has several events coming up throughout this semester including a CrossFit competition and a whiskey tasting social.

The Veterans Center is open 7 a.m. to 5 p.m. Monday through Friday but is looking to expand its operating hours to 7 a.m. to 7 p.m. in the future.

“This is like home at K-State pretty much,” Justin Colby, sophomore in open option, said. “You can go anywhere at K-State and feel good, but to have discussion, debate, elaborate ideas, it’s a good place to have that.” 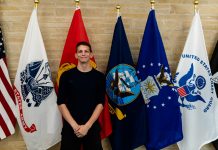 Life after service: An afternoon chat with an Army veteran