This season’s edition of the semiannual Little Apple Comic Expo brought comic lovers and costume makers from around the state into the Kansas State Student Union from 10 a.m. to 5 p.m. on Sept. 23.

Jim and Paige Dixon, professional costume makers, were ready to entertain at this season’s comic expo dressed as “Batman” villains The Joker and Harley Quinn. Having been to 30-plus events like this one, they are experienced convention-goers and were asked to be the judges of the “closet cosplay” competition for low budget “Batman” costumes.

“Cosplay,” a combination of the words “costume” and “play,” is a popular slang word. It refers to the practice of dressing up as a fictional character and attending a fan convention, either for competition or just for fun.

“We try to stay in character as much as we can,” Paige Dixon said. “We give lots of advice and judge different panels. There is just always a lot going on.”

Ali and Josh Smith, the creators of LACE, sat at a front table by the KSU Ballroom and waited as people arrived, helping with check-ins and directions as vendors, cosplayers and guests enjoyed the event.

This was Ali and Josh Smith’s third show in two years. The Smiths said LACE got its start from Ali’s love of cosplay and Josh’s love of comics. Josh Smith said he has been collecting comics for 27 years.

“Our basement looks like a comic shop,” Ali Smith said.

Ali Smith has her own business, KC Cosplay and Photography, the “biggest cosplay group in the midwest,” according to Josh Smith. They chose Kansas State as the home of the Little Apple Comic Expo because of the students, but they also have a similar event in Maryland where Josh Smith is from.

The first two comic expos they hosted in Manhattan averaged 2,000 people in attendance. They use Ali Smith’s business to spread word about the event, and she said social media is the biggest tool they have when it comes to spreading the word to vendors and attendees. They also hand out flyers in Aggieville to promote LACE.

Walking around at the event, guests could stop and speak to a plethora of vendors and booths showing off everything from collectible comic books to movie prop replicas.

Bret Whitmore and Kaylen Ashley, two sisters who run the Facebook page “BK Crochet,” had a booth together selling different crocheted pieces. This season’s LACE is Whitmore and Ashley’s first expo as vendors.

“It’s a good way to use your time and your hands,” Whitmore said.

Darren Neely, a graphic designer who creates his own comics, sat at another booth on the show floor. He sells prints and small comics that he has been working on for the past eight years.

“Being around artists and being around creativity, it just reaches critical mass,” Neely said. “And you just have to create something.”

The Burrow also made an appearance selling handmade crafts in their own booth. The Burrow is the K-State chapter of the Harry Potter Alliance, a nonprofit organization focused on charity and activism among “Harry Potter” fans.

Stephanie Bayless, treasurer for the Burrow and junior in geology, said her love for conventions brings her here and she likes getting to see behind-the-scenes action.

Different volunteers and guests were dressed in a variety of costumes, from Pokémon characters to Spider-Man, as well as 15th century infantrymen. Justice Dent, LACE volunteer and sophomore in park management and conservation, was dressed in his Swiss battle armor for one of the three sword fighting demonstrations held during the comic expo.

“We duel with our different weapons to show what it used to look like,” Dent said.

In costume as “Batman” villain Poison Ivy, Carly Bird, Manhattan resident and LACE volunteer, worked promotions and was in charge of the costume contests. Since Saturday’s event corresponded with National Batman Day, they chose “Batman” characters as the theme for the “closet cosplay” contest.

“We want to nudge the people who might be intimidated to come out today by saying, ‘Hey, we want to see your best closet cosplay, Batman universe,'” Bird said.

The idea, Bird said, is to keep costume contests at a level that everyone can participate in.

There were two different costume contests for the event, the “closet cosplay” contest and a floor contest. There were multiple floor contest winners, who received a golden ticket at the event and will be mailed a “goody bag” put together by Ali and Josh Smith.

The female winner for the “closet cosplay” contest was Kristen Graham, K-State graduate in arts and sciences, dressed as Wonder Woman. Kristen said she worked in an eight hour marathon to put her costume together.

The male winner was Jimmy Portela, senior in English creative writing, dressed as Bane. This was Portela’s first time entering a costume contest, and the majority of his costume came from clothes he already had and a mask he bought on Amazon. Both of the winners received a $50 gift card.

The next Little Apple Comic Expo will be held on March 18, 2018 in the Student Union. 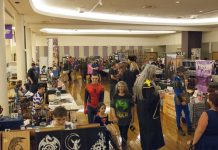 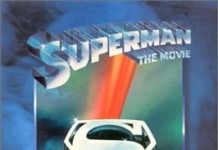