Mark Hutton, republican candidate for governor of Kansas and former businessman from Wichita, held a meet and greet with the College Republicans at Kansas State in Kite’s Bar and Grill Tuesday evening. The event was closed to the public.

Steven Johnson, 1988 K-State graduate and former student body president, was present to support Hutton and his vision as the campaign prepared to tour the state following the announcement of Hutton’s candidacy Monday.

Hutton, founder of Hutton Construction, served two terms in the Kansas House of Representatives and worked on the appropriations, commerce and taxation committees, where he worked with Johnson, before choosing to not to seek re-election to the House last year.

“I feel like I can pull those two experiences together to be a better governor for Kansas and to build a better Kansas,” Hutton said.

Hutton’s goal for higher education is to better prepare students for the workforce.

“We have a real challenge in Kansas right now in that our higher education institutions aren’t nimble enough to really be addressing the needs of industry,” Hutton said. “When you go to school here, you’re not necessarily learning the things that we need in industry.”

Another goal of Hutton’s is to reform budget analysis.

“There’s a lot of areas that Kansas can improve in, and a lot of them circle back to one specific area, and that is fiscal responsibility,” Hutton said.

If elected, he will aim to make state budgeting more efficient and less secretive through performance-based budget analysis, which evaluates the principles of every agency in the state and compares money spent to the value that spending returns. This prioritizes the areas the state puts its money.

Some members of the College Republicans at K-State are looking forward to seeing someone new in the governor’s office, citing some disappointment in Governor Brownback.

“I think there are a lot of things that Governor Brownback could have done much better,” Evan Steckler, senior in architectural engineering and events coordinator for the College Republicans, said.

While Steckler said he believes Brownback’s tenure has its pitfalls, both he and Taylor Latham, senior in financial management and president of the College Republicans, said they are looking for a new name in office.

“I would like to see someone who is humble, who is very strongly rooted in their principles and who is willing to work with our state legislature on issues,” Latham said. 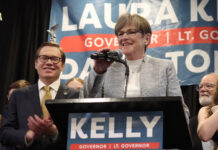