Kansas State University president Richard Myers listened to the concerns of students during a “Pizza with the President” luncheon in the Student Union on Wednesday.

More than a dozen students attended the luncheon and voiced concerns and observations while eating pizza and cookies in the Student Union’s Konza Room.

The conversation with the president encompassed a variety of topics ranging from the K-State 2025 plans to international relations and politics.

Myers said to the students that among the goals for K-State 2025, there is a plan to organize parking infrastructure. Those plans include moving parking to the edges of campus and building a transportation system for students to park and ride from the west parking lot of Bill Snyder Family Stadium.

Ashton Kappelman, graduate student in industrial engineering, asked Myers about other ways the university measures progress toward improving education with funds donated during the fundraising campaign.

“Since we’ve started this campaign in 2011, we’ve added 46 endowed faculty chairs,” Myers said. “It wouldn’t have happened if we didn’t have that goal, that metric.”

Myers also addressed the ongoing Title IX lawsuit, which was filed by two K-State students after two alleged incidents of sexual assault at fraternities. Myers said that of the 10 counts filed in the suit, nine of them have been resolved. The last count, which deals with the university’s involvement with fraternities and university branding, is still being debated in court.

The issue of branding has been under review by university officials and prompted changes in policies regarding the use of K-State symbols such as Willie the Wildcat.

When discussions arose about student population numbers, Myers revealed that enrollment for the current semester is down from last semester.

Myers said while some departments have had an increase in enrollment, out-of-state enrollment has decreased. As part of addressing enrollment concerns, Myers said the university plans to hire an enrollment consultant to make the changes necessary for better enrollment.

Myers also talked about what students at K-State can do to incite positive changes in the university. In particular, Myers said alumni donations have decreased because of rude student behaviors during sporting events that are televised on stations like ESPN during football and basketball season. 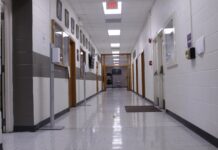