Kansas State marching band director Frank Tracz cut the band off in the middle of “The Wabash Cannonball” during the pre-game festivities of the Baylor game Saturday after K-State fans chanted “F*** KU” in the student section.

After the band stopped, a pre-recorded message from head football coach Bill Snyder was played on the video board. In his message, he asked fans not to disrespect the Wabash tradition by saying the “vulgar chant.”

Tracz said stopping the band mid-performance was something that had been discussed by the administration and that he received a message from the president’s office and K-State Athletics to cut the band off shortly after the chant started up.

“I’ve been here an awfully long time,” Tracz said. “I’m really getting tired of it. I know the students are. I know a lot of parents, families and kids are just tired of it, too.”

Tracz said “the chant” sullies the good name that he and others have put work into building at K-State.

“To let some kids that are quite immature and irresponsible think they can be flippant about things and say things just because they are in a crowd … to ruin what so many people have spent so many years building, that’s sad to me,” Tracz said.

While the video played, the silenced band members resumed their normal routine and began to form their “tunnel formation” for the football team to run through on the field.

The university’s administrators have ramped up their efforts in recent times to put an end to the chant. In a February letter to the student body and in an address to the Student Governing Association at their first meeting this semester, President Richard Myers decried the chant, saying it has been both “personally embarrassing” and embarrassing for the university.

OPINION: Myers’ letter on sportsmanship like a parent scolding children

After the game, Marissa Grace Sullivan, trumpet player in the marching band and senior in psychology, took to Facebook to explain her feelings about the chant.

“When a vulgar chant like “F*** KU” is shouted over the marching band, it disrespects the hours that the band puts into learning pre-game [routines],” Sullivan said on Facebook.

Recently, ESPN’s Brandon Chatmon named “The Wabash Cannonball” the best pre-game tradition in the Big 12, putting it up there with nationally-known traditions like “dotting the ‘i'” at Ohio State and “War Eagle” at Auburn.

The song is a tradition at K-State that dates back to the 1968 fire in Nichols Hall. “The Wabash Cannonball” was the lone surviving piece of music because it was with the band director instead of being stored in Nichols Hall.

“The Wabash Cannonball” was played for the first time at a basketball game just three days after the fire, and the band has been playing it ever since.

“I don’t want K-State to be known for students who yell curse words during a tradition,” Sullivan said. “It casts aside all the great things K-State should be known for.” 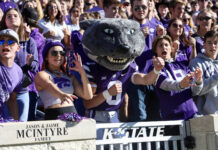 Snyder’s endorsement of Roberts is greeted with backlash