The Kansas State football team will head to Austin, Texas, to face the University of Texas Longhorns this Saturday.

Here is what we do know: they have a big, athletic defense that, other than the game against Maryland, has been fairly dominating.

“They have good size, and they also have good range,” Bill Snyder, K-State head football coach, said at a weekly press conference Tuesday. “You look across the entire defense and you do not see small guys.”

Defensive coordinator Todd Orlando is in his first year at Texas, but he has been working with head coach Tom Herman since 2015. His defense plays similarly to the defense the Wildcats saw in use by Baylor last weekend.

Texas will run a “3-4 defense” — three linemen and four linebackers — or they will have an extra man on the line as a defensive end. The major difference between Texas’ defense and Baylor’s defense is that the Longhorns’ extra rusher will often be a safety.

Texas also has a “rover,” a linebacker that moves freely around the field and tries to make whatever plays he can. Junior linebacker Malik Jefferson already has 23 tackles in that position this year. Jefferson has a knack for being in the right place at the right time to make plays.

If K-State can get a running attack going, they should have opportunities to run short, confidence-building passes. These opportunities could help pull the Wildcat receivers out of their recent slump.

“It is definitely hard to get it out of your head once you have a drop and it just keeps building up,” K-State sophomore wide receiver Dalton Schoen said at the Tuesday press conference. “I think what we need to do is just forget about [the drops] and focus on looking the ball all the way in.”

Texas’ offense is a “spread offense,” meaning they want to spread the enemy defense out laterally and run quick-hitting plays led by sophomore quarterback Shane Buechele. He has racked up 546 passing yards and three touchdowns while also throwing for two interceptions this year.

Texas also has a freshman quarterback, Sam Ehlinger, who has played for the Longhorns when Buechele is struggling. Expect Buechele to get the vast majority of snaps unless he has a really bad day.

Texas’ running back position is especially enigmatic. Sophomore running back Kyle Porter is listed as the first option on the depth chart. Porter is not injured, or at least there is not anything listed online for an injury, but last week junior running back Chris Warren III got almost the same number of snaps.

Buechele is not much of a threat running the ball, but he will frustratingly scramble for some first downs. Texas tends to fake run plays and will run play action on screen passes. They have big, athletic receivers.

Expect K-State’s front seven to be able to stuff Texas’ run and allow the cornerbacks and safeties to really lock on to their coverages. If K-State can lock up Texas’ run game, they should have a good day on defense.

Historically, K-State has a winning record against Texas, 10-7. The Wildcats have dominated teams across the Lone Star State in recent years, including beating all the schools from Texas on their schedule last season.

“I take pride in it,” D.J. Reed, junior defensive back, said. “It is pretty cool knowing that, so hopefully we keep the streak going.”

My prediction: this will be a very low scoring game, and both teams will struggle on offense. I think K-State will win regardless, 17-14. 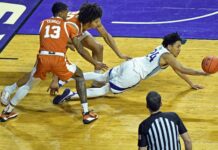 K-State pushes No. 13 Texas to the limit, falls in final seconds