O’Malley, his family, campaign staff and members of the community gathered in Varsity Donuts for the announcement Tuesday.

O’Malley’s campaign will revolve around three main points, as determined by a listening tour across the state. One of these points includes the betterment of the state’s education system. Should he be elected governor, O’Malley aims to make Kansas’ education system the best in the world in order to boost the state economy.

“Someone told me recently it’s Finland who supposedly has the best education,” O’Malley said. “I’ve got Finland in my crosshairs.”

In order to lead the world in education, O’Malley said Kansas needs to improve in two areas: high school graduation rate and the percentage of people going on to receive higher education. Currently, the state graduates high school students at a rate of 85 percent, and the percentage of graduates who go on to higher education sits at 40 percent. To lead the world, Kansas will need to increase those rates to 95 percent and 70 percent, respectively.

O’Malley said he believes it is feasible for Kansas to lead the world in education.

“It’s completely feasible because we already have great schools,” O’Malley said. “It’s not like we’re Mississippi.”

The campaign also focuses on transforming state government to create “the most innovative, efficient and creative workforce” at the state level using leadership from all political parties.

“I have these traditional Republican values, and I can hold those, and hold them dear and advance them, while working with those that have other values,” O’Malley said. “That’s how we solve tough problems.”

During his speech, O’Malley criticized fellow Republican Kris Kobach, who is also running for governor.

O’Malley expressed disappointment in the state’s current administration and its failure to make progress on issues.

“Things lately haven’t gone as well as we need them to go,” O’Malley said. “The way things have happened in the last several years, the way things have gone on in Kansas the last four, five, six, seven, eight years have left us wanting something much greater.”

Before embarking on his campaign for governor, O’Malley was employed as an aide to a former state governor, a member of the Overland Park Chamber of Commerce, a member of the state legislature and the president and CEO of the Kansas Leadership Center.

“I can really get behind what he wants for Kansas,” Bobby Bisagno, freshman in engineering, said. “He’s got my vote.”

O’Malley was a K-State student himself, as well as his wife. He graduated in 1997 with a degree in history.

“It is special for me to do this here in Manhattan,” O’Malley said. “It means a lot for my wife and I to be back at our alma mater. We love this community, we love this school. It was phenomenal to be back.”

O’Malley will visit the cities of Beloit, Dodge City and Garden City on Thursday to continue his announcement tour. 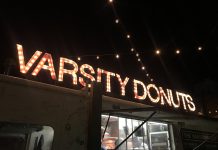 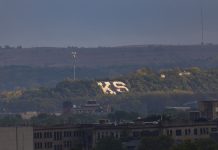 Need a study break? Check out these Little Apple getaways