Home Community Letters to Editor Letter to the editor: K-State needs to respond to anti-Semitic vandalism

I am a faculty member at the University of Kansas Department of Psychiatry. I also serve as the co-chairperson of our Diversity Committee. We discuss incidents of discrimination that take place in the community and how we should respond.

It is disheartening to me that an incident of anti-Semitism has hit close to home — that it is not something I will discuss at the next committee meeting, but rather it is something I have to confront more immediately because it concerns my daughter.

I am referring to the destruction of the Sukkah, which had been purchased by Hillel and placed near the dining halls at Kansas State. It was broken apart and the pieces were carried and put around the car owned by student activist Glen Buickerood.

I do not know if Mr. Buickerood is Jewish, but I understand that he has been involved in diversity initiatives for the Housing and Dining Services. I am alarmed at this act of aggression against him by people who have anti-Semitic beliefs.

This incident has had a strong impact on my daughter, who is Jewish and involved with Hillel. She no longer feels safe at K-State. The lack of response from the administration at K-State has left her feeling isolated, as if no one cares — or worse, as if the members of the administration are complicit in the expression of anti-Semitism.

In 2014, Frazier Glenn Miller, an avowed anti-Semite, drove to two Kansas City Jewish retirement communities with the goal of killing. Three people lost their lives, including a boy who was 14 years old. None of them were Jewish.

Anti-Semitism hurts everyone, not just people who are Jewish. It is dangerous to the entire student body to allow these acts to take place without a response.

I look forward to hearing how K-State will respond to this incident.

Dr. Micaela Wexler is a clinical assistant professor at the KU Medical Center. The views and opinions expressed in this letter are those of the author and do not necessarily reflect the official policy or position of the Collegian. Please send comments to opinion@kstatecollegian.com. 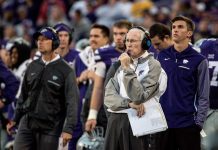