The Kansas State volleyball team will look to jump the fourth place team in the Big 12 tonight as it travels to Ames, Iowa, to face off against the Iowa State Cyclones inside Hilton Coliseum.

The Wildcats are coming off a huge five-set win over Texas Tech on Saturday and are now 9-9 overall and 2-3 in conference play. The Cyclones are the No. 23 ranked team in the country and are 11-3 overall and 2-2 in Big 12 play.

These two teams have been very even in the past five seasons; they have split the season series every year as neither team has won on the road against the other. The Wildcats haven’t won in Ames since the 2007 season.

This season, the Wildcats have been led by their lone senior, Bryna Vogel, who has had 16 kills in each of the last two matches and had a season-high nine blocks on Saturday against the Red Raiders. Junior Kylee Zumach and freshman Peyton Williams each had 11 kills in the winning effort. Posting her eighth double-double of the season, sophomore Sarah Dixon had 19 assists and 13 digs.

Iowa State had a great start to the season, beginning 7-0, but have struggled a bit lately, winning four of its last seven matches.

What keeps the Cyclones going is their defense, as they rank first in the conference in digs per set at 17.1 and second in the Big 12 in blocks per set sitting right above three.

Iowa State sophomore libero Hali Hillegas leads the conference and is 14th in the nation in digs per set at 5.57. The Cycloes are defensively are led by senior Alexis Conaway, junior Grace Lazard and freshman Avery Rhodes, who are all in the top 10 in the Big 12 in blocks per set.

The Cyclones have been very good at home this year (4-2), but were swept in Hilton Coliseum on Saturday night against the Baylor Bears. Iowa State and K-State have both beat the same two opponents in Big 12 play, Texas Tech and Oklahoma.

The Wildcats and Cyclones are set to play tonight at 6:30 p.m.

No. 5 K-State falls in a signature Big 12 battle 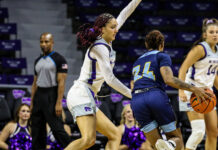 Conference woes continue as Wildcats fall to No.15 Iowa State