Wefald Hall may be Kansas State’s newest residence hall, but residents have been reporting many bothersome flaws in the building’s construction.

Wefald residents Zach Brunner, sophomore in computer science, and Phil Randall, junior in electrical engineering, said the bathrooms do not drain properly. Water stands on the floor in multiple rooms.

“The bathrooms aren’t level; there is standing water all the time,” Brunner said.

Randall said the bathrooms are better than last year, as retaining walls were added to the handicap-accessible showers, and most of the standing water is the fault of the residents, but the floors are not sloped properly.

Additionally, there are gaps between the walls and the ceilings in multiple rooms, allowing residents to hear excess sound from their neighbors.

“The rooms are like 50 times better than the other dorms, but they suck at blocking sound,” Randall said.

Some residents said the poor soundproofing of Wefald can lead to unwanted eavesdropping.

“I can hear both of my neighbors’ conversations clear as day, and they can hear me,” Brunner said.

These issues are the result of oversights during Wefald’s construction due to tight scheduling.

Skyler Harper, associate director of facilities management, said the construction company hired to build Wefald, Crossland Construction, had a short period of time to review more than 2,000 pages of plans and specifications. This short review period, coupled with the overload of information, is the root cause of Wefald’s construction errors.

The bathroom floors are not properly sloped to their drains because the Wefald plans said the drains should be level with the floor, but a small note in the specifications said to slope the floors in toward the drains instead, Harper said. That note was missed by the contractors when they went through the large quantity of notes.

Mark Taussig, landscape architect for K-State, said the issues during construction were likely due to the speed at which the building went up.

Taussig said Wefald was constructed at a rate of one floor per week. At that speed, construction errors were not caught in time, and these mistakes were repeated all the way up the building, floor by floor.

K-State Housing and Dining Services are aware of the issues and are working to correct them.

Harper said one of the bathrooms was experimentally redone to see if they could rectify the issues. It worked, and the solution will be applied to all of the affected bathrooms during holiday breaks when Wefald is not occupied.

Harper said the majority of the issues with the wall gaps were fixed over the summer, but complaints are still being actively addressed.

Despite these issues, Taussig said he considers Wefald’s construction to be successful and that errors are to be expected in projects of this scale and speed.

“Everyone overall is going to say it’s a great project,” Taussig said. “There’s been some problems, but that always happens. When I hear people comment about [Wefald] it’s always very complimentary. … Overall, I’m really pleased.”

In addition, Harper said plans to construct an amphitheater in the grassy area between Wefald, Marlatt Hall and Goodnow Hall are moving forward.

The amphitheater was originally an optional add-on to Wefald, but the bid from Crossland was determined to be too high, and K-State could do the job itself in a more cost-effective manner.

Nick Lander, interim associate director of residence life, said he is pushing for the amphitheater’s completion. 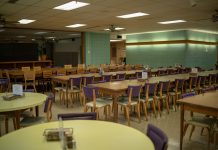