There are not many people who can say they are in a “heated Scrabble game online” with former president Barack Obama. One of them came to Kansas State Friday to talk with students and faculty.

K-State alum Pete Souza started his career at the Collegian. Eventually, his job landed him in the White House as chief official photographer for Obama.

Souza returned to his alma mater for the How I Landed My Job lecture series hosted by the A.Q. Miller School of Journalism and Mass Communication. There, he spoke to students and faculty about the path his career has been on so far and how his professional connections have helped him progress.

“It started [at K-State],” Souza said. “I always tell students, ‘Don’t piss your classmates off, because in 10 years, they could be in a hiring position.’”

Students and faculty had the chance to ask questions about his work experience and how he got the jobs he did.

“I thought it was pretty cool that someone who has had so much experience in photography was willing to come back and talk to little town Manhattan, Kansas, about it and make someone like me … be like, ‘Yeah, that’s something I’d want to do,’” Safiya Woodard, senior in digital media, said.

Tom Hallaq, assistant professor in journalism and mass communications, said it is very beneficial to K-State students to meet alumni who have succeeded in their fields so they can see what can be done after graduation.

“I think it’s wonderful that we can have people that have had such success in their careers, and also have that connection to K-State, to come and talk to our current students and let them know what our students can achieve,” Hallaq said. “Sometimes it’s by happenstance, sometimes by skill or by networking.”

Souza came to K-State to earn his graduate degree in journalism to help him build his portfolio. He worked as a photographer and photo editor for the Collegian while in school.

He said the people he has met since graduating have helped him get various jobs at the Chicago Tribune and as an official White House photographer for former president Ronald Reagan. He has also worked at National Geographic and has done freelance work, which have all developed his portfolio.

“One of the advantages I had working at the Obama White House was [that] I’ve kind of been through everything, photographically,” Souza said.

Much of the lecture was dedicated to describing his experiences and assignments he had on the job. His career included everything from photographing a dog who liked to hang out on a roof for a Kansas newspaper, taking photos in Afghanistan and even photographing at some of the Obama family functions.

“Don’t ever discount your first job,” Hallaq said. “Everyone starts off at the bottom, but wherever you start doesn’t mean you’re going to end there. That’s just the beginning.” 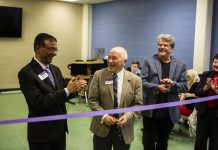 NBC senior VP of productions continues ‘How I Landed My Job’...