The Kansas State Police Department has become a staple in our lives lately with everything that has been going on around campus, but do we even know anything about the police and who they are?

Ronnie Grice, chief of the K-State Police, provided a more in-depth look into who he is so the student body can get to know him better.

Grice is originally from Arkansas, where he went to school to study law. While looking for work, Grice was convinced to go on some ride-a-longs with the Arkansas Highway Patrol. He really enjoyed the feeling of being a police officer, so he decided to switch his occupation of choice from lawyer to cop.

Grice worked with the Arkansas Highway Patrol for 12 years before working with a community college as the director of public safety. Grice wanted to move to a campus with a bigger population, so he came to K-State.

“I wanted to get the ‘big school experience,’” Grice said.

“When working with a university, you get a unique experience,” Grice said. “It’s like a city within a city.”

Grice said he is happy with the K-State Police being able to help students when they are in need.

“We are able to provide law enforcement with a personal touch,” Grice said. “If your backpack or laptop gets stolen, we are here to take care of that problem personally.”

The biggest challenge Grice said he feels like they take on is when people do not let the K-State Police investigate things first.

“I feel like if we have the chance to investigate things, we would be figuring things out much quicker,” Grice said.

Grice encourages students and staff to take time and look at the K-State Police page on the university’s website and learn more about them. They have a new video they put together that Grice is really excited about, along with contact information for all the K-State Police staff.

“I’m an open person with an open door,” Grice said. “I’m a listener, and I will make time for you. Please don’t hesitate to ask a question or bring a concern. I will also try and speak to any organization that would like me to.” 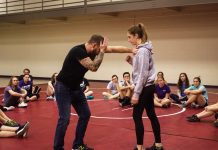