The Kansas State soccer team is facing a pair of away games against Oklahoma State today and the University of Oklahoma on Sunday. This weekend’s matches will mark the end of the regular Big 12 season.

This is the first time the Wildcat soccer team has competed in the Big 12 conference since its establishment, which was announced in Dec. 26, 2014.

The Oklahoma State Cowgirls, who will host the Wildcats in Stillwater, Oklahoma, at the Cowgirl Soccer Complex, are currently in first place in Big 12 soccer standings, barely edging past West Virginia University.

The nationally-ranked Oklahoma State team has won five of its past six matches, only dropping a game against the West Virginia Mountaineers on Oct. 6.

Next, the Wildcats will take on the Oklahoma Sooners, who have found themselves winless during Big 12 play.

Oklahoma is coming off a two match losing streak against West Virginia and Texas Christian University. Before that pair of losses, the Sooners had three scoreless ties from Sept. 29 to Oct. 6. The last match the Oklahoma women’s soccer team won was on Sept. 10 against the University of Illinois.

This past weekend, the Wildcats dropped two close 1-0 matches at home against Baylor on Oct. 13 and the University of Texas on Oct. 15.

The Wildcats had their opportunities against Baylor, especially in the 83rd minute when the Bears were called for a handling and gave the Wildcats a penalty kick. Baylor goalkeeper Jennifer Wandt blocked the attempt by K-State freshman forward Hannah Davis. Wandt was announced as the Big 12 Freshman of the Week because of her performance against the Wildcats.

In its first two seasons, the K-State soccer team has been powered by the underclassmen. 75 percent of points have been scored by either a freshman or a sophomore, while a senior has yet to score.

The Wildcats are coached by Mike Dibbini, who was previously at Kansas Wesleyan for eight seasons and California State Polytechnic University, Pomona for two seasons. 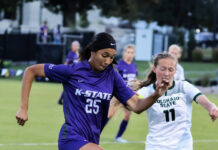