In front of a sparse crowd, K-State held Missouri State at arm’s length for the whole game. The exhibition match was a fundraiser for the American Red Cross for hurricane relief.

K-State’s redshirt freshman guard Cartier Diarra led the team in scoring with 14 points. This was the first time Diarra got to play in a basketball game at Bramlage after injury held him out last year.

“I’m pretty anxious before every game,” Diarra said. “I just listen to my gospel music and it soothes me and I’m ready.”

K-State jumped out to a 9-0 lead at the beginning and never looked back. By half time, the Wildcats had amassed a 39-31 lead.

A three-point basket from Missouri State freshman guard Mustafa Lawrence cut K-State’s lead to six, 61-55. The Wildcats responded with a 5-1 run to end the Bears’ rally.

K-State had enough of a lead that they were able clear the bench and get everyone into the game. Junior guard Kade Kinnamon made a three-pointer with 15 seconds left in the game to end the scoring for the day.

“Everyone got a chance at the end, that was good for them,” head coach Bruce Weber said.

K-State showed off a lot of depth, putting 10 players in the first half. Junior guard Barry Brown Jr. lead the team in the first half with eight points — he would finish with 12 for the game.

For Missouri State, it was a one-man show. Senior forward Jarrid Rhodes scored 20 points in the game, with 16 at the half.

For K-State, sophomore guard Brian Patrick was 2-3 from three-point range for the day, leading the Wildcats in three-point percentage and tying with junior guard Kamau Stokes for total three-point shots made. Stokes attempted seven.

Redshirt freshman James Love III was inactive with an injury. He could be seen in a cast and on a scooter. Missouri State’s senior forward Alize Johnson was also held out of the competition due to injury.

One of K-State’s most consistent scoring threats last season, Stokes scored 13 points and had three assists and four steals.

K-State will host Fort Hays State in another exhibition game on Sunday at Bramlage Coliseum. Missouri State will be in action again against Southwest Baptist University on Nov. 1. 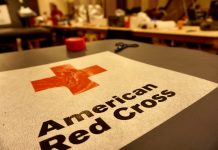