The Kansas State volleyball team came up short on Saturday in a 3-2 loss to West Virginia University in Morgantown, West Virginia.

Two of the Wildcats had double-doubles: senior opposite Bryna Vogel had 11 kills and 13 digs, and sophomore setter Sarah Dixon had 26 assists and 10 digs. Defensively, junior middle blocker Macy Flowers and redshirt freshman middle blocker Peyton Williams had career highs in blocks during the match.

“Volleyball naturally has some pretty significant ebbs and flows to it,” head coach Suzie Fritz said to K-State Sports. “But we have got to get better at minimizing those ebbs and flows. It really is just a matter of consistency. There are times, in both the Baylor match and in this match, where things are really starting to come together. Eighteen blocks in five games is an extraordinary effort at the net.”

The third set was the most competitive set in the match, featuring nine lead changes. After staying tied at 16-16, the Mountaineers eventually won the set 25-22.

Set four was a must-win set for the Wildcats. K-State was very focused in the fourth set, not committing a single error. After taking a 4-1 lead, K-State had no issues with West Virginia as they won the set 25-19 to force a decisive fifth set.

The Mountaineers jumped out to a 3-0 lead in the last set and K-State was never able to come back, losing 11-15. This marked the Wildcats’ sixth loss in the last seven games.

Next up for the Wildcats, they will return home on Wednesday to Ahearn Field House as they host the Iowa State Cyclones who are 14-4 overall and 5-3 in Big 12 play. 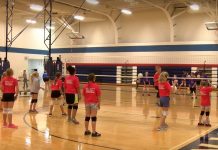