Harry E. Erickson wrote the fight song in 1927 while he was a student at K-State back when the school was called the Kansas State Agricultural College. Erickson’s wife, daughter and grandson were in attendance as the marching band played the fight song in its entirety, including the typically unplayed first verse, “Hail to the Purple.”

Frank Tracz, director of the marching band, said the band gave the Erickson family a framed article about the old K-Stater and his fight song.

“I think it was really, really nice that we honored the Erickson family on Saturday,” Tracz said. “[Mrs. Erickson] was touched and moved by the whole thing. It was just a good thing.”

Tracz said he thought the fight song was the ultimate gift to the university 90 years ago.

“It’s a great fight song,” Tracz said. “You hear it, it immediately makes you happy, gets you fired up and it forces you to remember all the purple things about Kansas State.”

Tracz said that due to how often the fight song is played, it’s easy to teach to new band members.

“How to play it — how to play it with good sound, good tone — that’s what we spend our time on,” Tracz said. “The fight song is easy to memorize. It’s one of those that they say lays really well; it comes out of the instruments very easily. It just flows real nice. It’s a good, solid fight song.”

Joann Irvin, sophomore in music education, said she loves the fight song. She plays clarinet in the marching band, and is currently learning the trombone part to play in the Cat Band for basketball games.

“It’s cool to hear both sounds,” Irvin said. “And it makes me more excited to listen to the fight song when we’re playing it because you can listen to other sections.”

Irvin said she still has fun performing the fight song after all this time, especially during exciting parts of football games.

“After touchdowns, you can watch everybody get really into the fight song,” Irvin said. “They move their bodies so intense and crazy. Everybody’s putting their full effort into dancing to it and playing it, and it’s just so much louder and more intense.”

“It gets my heart pounding and it’s a great feeling to sing along with 50,000 others,” Bolton said. 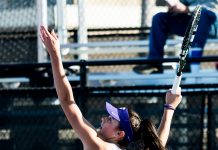 Letter to the editor: Marching band’s anger toward reporters not justified