Here’s a list of the must-watch games in the National Football League this week.

The Miami Dolphins are currently riding a three-game winning streak. Two weeks ago, the team defeated the Falcons which was 3-1 at the time, and most recently it won a rematch with division rival New York.

With starting quarterback Jay Cutler likely out with a rib injury, backup Matt Moore will lead the way. Moore led the Dolphins back from a 14-point deficit against the Jets.

Running back Jay Ajayi has yet to score on the ground this season, but he could have a big week against the league’s worst run defense.

Baltimore is struggling, losing four of its last five games after a 2-0 start. The good news is, all three Ravens wins have come against AFC teams.

Joe Flacco hasn’t surpassed 200 passing yards since week five, and has only thrown two touchdowns all year. He will aim to get back on track against a Miami secondary that just released cornerback Byron Maxwell.

The Thursday Night Football matchup can be seen on CBS at 7:25 p.m.

These two teams are tied for second place in the NFC East, so a win would be huge to keep their chances to compete in the division alive.

Dallas is coming off a 40-10 win against San Francisco. It was a much-needed win as the Cowboys lost its previous two games by a combined nine points.

Ezekiel Elliott exploded against the 49ers defense. He was dynamic, as he ran for 147 yards and two touchdowns, and even caught a pass that resulted in a 72-yard score. Getting past a slow start to the season, Elliott is playing to form now with two straight 100+ yard games.

Week seven saw the Redskins fall to the Eagles for the second time this season, 34-24. Kirk Cousins played despite learning about his grandmother’s death shortly before the game. He threw for 303 yards and three touchdowns, but was out-dueled by Eagles quarterback Carson Wentz, who added a fourth touchdown.

The Cowboys’ defense is allowing 23.7 points per game. The Redskins will likely light up the scoreboard, as the team is 3-1 in games, and score at least 24 points.

This week, Monday Night Football will feature a matchup between No. 1 and No. 2 in the AFC West.

After narrowly defeating the Chargers in week one, Denver looked impressive in a 42-17 rout of the Cowboys. Since then, the team has gone 1-3. That slide has seen the Broncos defeat the Raiders, lose to the Giants and lose 21-0 to the Chargers.

Quarterback Trevor Siemian has been struggling, throwing seven interceptions and posting a 39.6 QBR. An encouraging stat for the Broncos is that since 2013, they have beaten the Chiefs three out of four times when playing in Arrowhead Stadium.

Kansas City has a long time to prepare for this game. It has 11 days between games, as it last played on Thursday, Oct. 19. The long break might be needed as it has lost their last two games after starting 5-0.

In a 31-30 loss to Oakland last week, the Kansas City defense gave up 417 yards through the air, and Kareem Hunt was held out of the end zone for the second straight week.

Denver’s defense is allowing 19.7 points per game, ninth-best in the NFL and would love to give its rival a third-straight loss, but the Chiefs want nothing more than to get back on track by defeating the Broncos.

The action will begin in Kansas City at 7:30 p.m. Monday on ESPN. 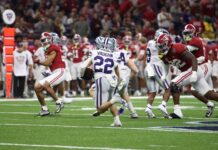