The Kansas State football team will travel to Lawrence for the annual Sunflower Showdown against the University of Kansas Jayhawks. The game is set to begin Saturday at 2 p.m. in Memorial Stadium.

Last week, K-State had a hard-fought loss at home against the University of Oklahoma Sooners. Both teams were tied in the fourth quarter, but Oklahoma pulled forward in the last ten seconds of the game, winning 42-35. The Wildcats are now 3-4 this season and have not been nationally ranked since week three.

Sophomore quarterback Alex Delton stepped up in place of an injured senior quarterback Jesse Ertz, where Delton threw for 144 passing yards and had one passing touchdown. Sophomore running back Alex Barnes also had some stepping up, with 108 rushing yards, 75 of those coming from the Wildcats’ second offensive play.

As for KU, the Jayhawks traveled down to Texas last weekend and took on Texas Christian University. The Jayhawks were destroyed by the Horned Frogs, 42-0. KU quarterback Peyton Bender had 38 passing yards and no touchdowns. Running back Kyle Herbert had eight rushing yards for the entire game against TCU. Herbert is usually a statistical leader for the Jayhawks.

During K-State’s weekly press conference, head football coach Bill Snyder talked about KU’s defense and what to look out for.

“They have some very fine players, players we’ve played against and know what their capacity for good performance happens to be,” Snyder said. “When you’re not doing well collectively, it tends to wear on you a little bit. We’re experiencing that as well, but I think they play hard. They’ve got good physical talent, they have some speed, they can run around on the back end. … They have the capacity to be a good defensive football team.”

Coach Snyder also talked about what he said to the K-State football team in preparation for the Sunflower Showdown.

“I said, ‘Number one, we have an awful lot of Kansas youngsters in our program, and automatically it means something special to them,'” Snyder said. “[Our players] from out of state, they treat it as another game. … But if you’re not from in-state, be there for your teammates that are from in-state because this is something they live with year-in and year-out, as much as anybody can.”

Snyder also talked about the role motivation can play in a football game.

Snyder said both quarterbacks, Ertz and Delton, will be on the sidelines looking for play time in the near future. Junior defensive back Kendall Adams is also expected for a return against the Jayhawks.

The game is set to start at 2 p.m. in Memorial Stadium. The game will be broadcast on FS1. 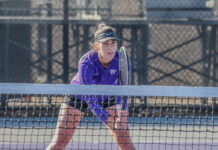 Wildcats fall to KU, dominate DePaul over the weekend 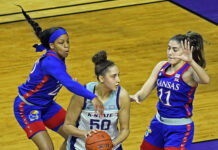