UPDATE on Nov. 1, 9:30 p.m.: A university investigation into the morning report of racist vandalism revealed that the affected individual is not a student at Kansas State University, in contradiction with earlier claims, according to Brandon Clark, Black Student Union adviser. It was not immediately clear why the individual claimed to be a student. The article has been updated to reflect the new facts.

The Riley County Police Department and K-State Police Department are investigating a case of racism after vandals covered a Manhattan resident’s car with racist threats and slurs at an off-campus apartment building Wednesday morning.

The car, a black Dodge Avenger with red rims, was found covered Wednesday morning with slurs written in what appears to be yellow paint. The slurs included copious usage of the n-word and direct threats to the individual, such as “Come outside to get hanged,” “All n****** must die!!” and “F*** you die dumb n*****!”, as well as a swastika painted on the individual’s windshield, as seen on pictures distributed widely through social media.

The Riley County Police Department issued a statement Wednesday morning which said officers immediately investigated the incident after receiving the report around 7:25 a.m. The RCPD estimates the vandalism occurred between 1:30 and 3:30 a.m. Wednesday.

K-State also released a statement Wednesday, which said the K-State Police Department is “supporting the investigation.”

“Safety of the Kansas State University community is of utmost concern,” the statement read. “Faculty and staff members are encouraged to share this information with students and community members to help the Riley County Police Department with its investigation.”

A representative of Prime Place Apartments, where the vandalism allegedly occurred, said the apartment complex did not have cameras at the location.

The vandalism is the latest in a string of discriminatory incidents to hit K-State. Last year, a former student caused outrage when she posted a photo of herself and a friend wearing black facial masks covering their faces, captioned with “Feels good to finally be a n****.”

In September, various posters promoting white nationalism were found on campus. The K-State community decried the posters and held a rally in support of diversity soon after. In that instance, the university issued a statement condemning the posters as being against the university’s Principles of Community, while at the same time asserting that as a government entity, it had no power or legal right to censor any non-discriminatory posters or speech on campus. Many students and campus leaders demanded the university take more extensive action.

In October, a homophobic slur was found in Bosco Student Plaza but was removed by campus officials soon after. Shortly after, a student posted a photo on social media referencing the KKK.

Later in October, Ryan Kelly, student senator and sophomore in civil engineering, wrote a report in which he alleged that he was harassed on campus. Kelly said he reported the incident to K-State Police, but his claims were marginalized and dismissed.

“I’m tired of incidents being treated as though they’re isolated and us having to speak out against the same kind of incidents over and over,” Porchia said.

The atmosphere in the Multicultural Student Office was mixed Wednesday morning. Inside the full room, some students expressed dismay at the latest instance of discrimination on K-State’s campus, while many were not surprised that it happened.

In anticipation of what they considered to be the university’s inevitable statement on the incident, students in the office expressed frustration with the university, stating that the university simply rewords the same generic statement that denounces vandalism for each specific instance.

Bernard Franklin, assistant vice president for student life, visited briefly with students in the office Wednesday morning. Before the racist incident became known Wednesday morning, President Richard Myers had announced in a letter Wednesday morning that he asked Franklin to help the university in its transition to “a new leadership structure to strengthen diversity and inclusion at K-State” over the next few weeks.

In regard to the racist incident Wednesday morning, Franklin, who became the university’s first black student body president in the 1970s, declined to make a comment, citing his status as a university administrator.

Jessica Elmore, 2015 K-State graduate and associate director of diversity programs at the Alumni Center, stopped by the office and addressed students. She challenged students to find a community of support, both at K-State and after they graduate.

Elmore said racism might be deeply embedded in society, but she pushed students to lead and work to fix the racial issues on campus.

On social media, the Black Student Union called for an emergency meeting tonight at 7:00 p.m. in the Bluemont Room of the Student Union to discuss how students can combat incidents of racism on campus.

Porchia said she was frustrated at the expectation that it is solely up to students of color to help eradicate any racial tension on campus.

“I don’t know [what we’re expected to do], and that’s unfair for us to be saddled with that work,” Porchia said. “What do you want us to do? Why are the victims of these heinous acts being asked to do the work? Even when we tell you that nothing changes — if I sit and talk to a brick wall for five years, I’m going to get tired of saying the same thing, that nothing changes.

“There’s been several things, and several statements,” Porchia continued. “Just look at the past five, six, seven incidents. Look at what we’ve been putting on paper, on social media, in the news — all of the answers are there. A lot of students of color, especially the black community, are at the point where we feel we’ve said everything we can say about stuff like this and either something is going to change, or it’s not, and it hasn’t. If the school wanted to prioritize it, it would be. It hasn’t.” 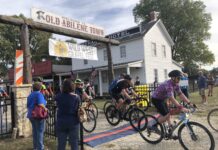