Pat Bosco, vice president for student life, hosted a Facebook Live video Thursday night to address incidents of bigoted vandalism that have occurred on or around Kansas State’s campus.

From 5:30 to 7 p.m., the K-State Parents and Family Association hosted a live Q&A session where Bosco publicly denounced the incidents and said these “repugnant” actions do not reflect K-State family values.

“I have never apologized for using the word ‘family,’ but families aren’t perfect,” Bosco said.

Bosco referenced the suspected vandalism of a Jewish sukkah — which was determined to be storm damage — the white nationalist posters and the homophobic slur found in Bosco Plaza. He said racism and hate are not unique to K-State, but that should not matter.

Students, parents, faculty members and more tuned in to express concerns regarding cultural competency, university responses to racist incidents and general safety on- and off-campus. There were approximately 300 viewers at the live video’s peak. Many expressed their gratitude for having Bosco come forward on Facebook to speak with his audience.

“Thank you, Dr. Bosco,” Katie Kingery-Page, a Facebook user, commented on the video. “Your leadership is appreciated. I am also grateful for President Myers’ statement today and for the statements our deans have made. Words matter. We need this. Thank you.”

Other users asked what more the university could do, and many others requested that the university takes a strong stance against these bigoted incidents.

“We don’t want to just hear lip service, we need to see action,” Tracy Lynn Wildey, a Facebook user, commented. Bosco said he agreed, saying he is just as frustrated as the students.

In response to the racist vandalism of a Manhattan resident’s car, university president Richard Myers announced there will be increased security on campus, as many of the incidents have been “cowardly” and occurring at night, Bosco said. Bosco also said people on campus should be able to see this increase in security starting tonight.

“I wish I could wave a magic wand and create a utopia,” Bosco said. “We’re in troubling times.”

Bosco said the administration will be coming up with a plan to keep students at K-State safe and help them feel more welcome.

“I think that we need to change, that we need to do better to get better,” Bosco said. “We’re no different from other big universities or large organizations, and it does take focus.” 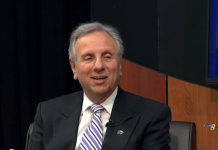 Channel 8: Dr. Pat Bosco sits down to talk about his experience in the K-State Family 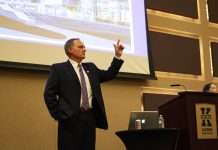 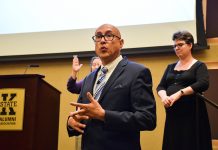