“Free Starbucks Coffee! Now that I have your attention, I’d like to mention that I’m looking for a potential girlfriend,” posters read in Bluemont Hall and Hale Library.

The owner of the posters is Gunner Gum, a junior in elementary education.

“It was … a spur of the moment kind of thing,” Gum said. “I’ve kind of always thought about it. I’ve talked to a few girls recently, and nothing ever came of it.

“Nothing ever seems to go right for me, so I might as well just let them talk to me instead of me putting myself out there,” Gum continued. “I guess I never really had much luck.”

Gum’s requirements for a potential girlfriend included loving Jesus, children, animals and Netflix, as well as enjoying “an adult beverage” and supporting the Second Amendment. The poster instructs applicants to email AnonymousEducator7@gmail.com.

Gum said he has gotten roughly ten email responses to his poster — some from potential girlfriends, and others commending his idea. Some respondents made new emails just to contact Gum, including “AnonymousInterest1” and “AnonymousEmailForPotentialBF.”

One response was from Mason Reaser, freshman in psychology, who was sent a picture of the poster by his roommate.

“I responded because I thought the person was funny, and that it would be funny to respond and have a conversation with them,” Reaser said.

Kaylee Gunzelman, junior in education, said she dismissed the poster at first, thinking it was for an event.

“I read a little more, and as I continued reading it, I couldn’t help but smile,” Gunzelman said. “It was a very clever sign, and I hope he finds nothing short of a dog-loving, funny, movie guru gal.”

Gum said he has yet to find a girlfriend through the posters as of right now.

“Most [people] email a few times, but nothing ever comes of it, so it kind of sucks,” Gum said.

Gum said others wanting to hang posters should be aware that they will have to feel comfortable enough talking online before they meet in person.

“It’s an idea,” Gum said. “I don’t know if I’d recommend it. Looking back at it now, I probably could’ve refined it more.”

Gum said he briefly debated taking the posters down due to recent events, but he said the response has been pretty great.

“In the digital age, it’s kind of nice to be anonymous and still get to know somebody without putting yourself out there,” Gum said. 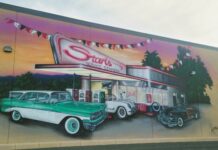 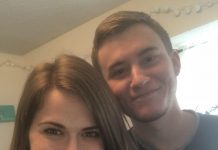 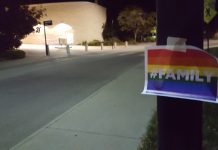