This season marks the 50th year for the women’s basketball program at K-State. In the series history between these two teams in the regular season, K-State leads 3-2 overall, 2-0 in Manhattan. In season openers, K-State is 40-9.

The Wildcats ended their exhibition schedule undefeated with a 61-46 win over Fort Hays State on Monday night.

This is head coach Jeff Mittie’s fourth season leading the Wildcats. At K-State, Mittie has led the Wildcats to a 61-38 record.

For Stephen F. Austin State, this is head coach Mark Kellogg’s third season leading the team. Kellogg has led his team to a 43-20 record over that time.

K-State’s lead scorer in its last game against Fort Hays State was sophomore forward Peyton Williams. Williams finished the game with 20 points, playing for 24 minutes on the court.

Senior guard Karyla Middlebrook started in 31 out of 33 games in the 2016-2017 season and played for 868 minutes. Middlebrook shot a .368 field goal percentage and .719 from the free throw line. Collecting 78 defensive rebounds and 106 assists, Middlebrook totaled 301 points.

Senior guard Shaelyn Martin played 793 minutes last season, averaging 23.3 per game. Martin made 48 out of 72 attempted free throws and recorded 117 defensive rebounds. By the end of the season, Martin had scored 161 points, averaging 4.7 per game.

The game between K-State and Stephen F. Austin State is scheduled to tip off tonight at 5:30 p.m. Fans can watch the game for free on K-StateHD.TV. 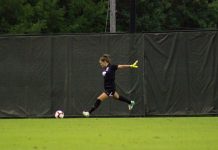 K-State soccer gets second draw of year against Indiana 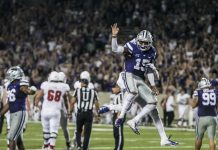 Analysis: Wildcats’ lack of focus nearly cost them the game against South Dakota 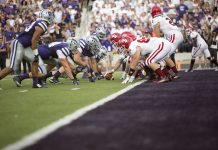