The Kansas State football team hosted West Virginia University, ranked 23rd in the nation, on Saturday in Bill Snyder Family Stadium. The Wildcats lost 28-23 and are now 5-5 this season.

West Virginia scored its first touchdown in the first quarter, where junior quarterback Will Grier threw a 75-yard touchdown pass to senior Ka’Raun White. The Mountaineers took the lead from then on out, 7-6.

In the second quarter, Grier threw three more touchdowns. Two of the three touchdowns would go to junior David Sills. At 14:56, Sills caught a 16-yard pass, and at 7:22, he caught a four-yard pass. The last scoring drive for the Mountaineers would be for White, receiving a 30-yard pass from Grier.

For the Wildcats, junior fullback Winston Dimel would be in the right place at the right time for two offensive drives. Dimel ran the ball for one yard at 12:44, and ran it again at 1:33 for two yards, both ending in scoring plays for the Wildcats.

At half time, freshman quarterback Skylar Thompson had thrown for 70 yards for the Wildcats, while Grier had thrown 275 yards for the Mountaineers. The possession time per team was very spread out. K-State possessed the ball for 19:40, while West Virginia possessed it for 10:20.

During the third quarter, no scoring plays occurred.

For the fourth quarter, McCrane kicked a 39-yard field goal, bringing the Wildcats up to 28-23.

Immediately after the game, K-State head coach Bill Snyder talked about his frustration.

“I think there’s a stronger word than frustrating,” Snyder said.

The attendance of Saturday’s game was 51,233, the 39th consecutive sellout for the K-State football program.

During this game, McCrane broke a record to become the all-time leader in career field goals for the Wildcats with 55, surpassing Martin Gramatica.

“It’s an honor to be up there with [Gramatica], but we need to win more ball games,” McCrane said.

The Wildcats will travel to Stillwater, Oklahoma, next week to take on the Oklahoma State Cowboys. The starting time is to be announced. 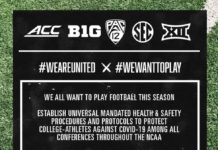 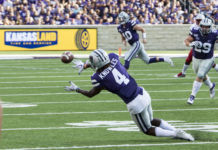 ANALYSIS: Who will be K-State’s one nonconference foe for the 2020 football season?

K-State, KU compete for bragging rights while tied for last in...