An audience gathered in Kedzie Library on Monday to hear Carrie Henderson, senior vice president of productions at NBCUniversal, gave her insights on life after college and the ingredients necessary to succeed in a dream job.

Henderson began the lecture by reassuring the audience that feelings of confusion and fear they may be feeling is normal and is something she experienced during her time as a student at Kansas State.

As a television producer at NBC Universal Studios, she is currently working on series such as Mr. Robot and The Sinner. In the past, she worked at TNT and Walt Disney Studios.

Henderson credits her career to a “help wanted” ad from Walt Disney Studios in a Kansas City area newspaper after her graduation. After applying, she was offered a position and relocated to Los Angeles, a city she had “always dreamed” of living in.

After a short time at Disney, the termination of a production set left Henderson without a job.

Henderson told the audience that being young, courageous and naïve was a blessing and was ultimately the push that helped her make the final decision to stay in California, find another job and continue her career.

“It can be very daunting to move to another city and start a new life filled with uncertainties, but being able to ask [Henderson] questions about her journey helped me figure out what my next step will be in pursuing an acting career,” Guiden said.

Henderson went on to list “ingredients” she feels everyone should utilize to be successful in their careers: passion, naivety, risk taking, luck, timing and asking for help. All of these allow you to succeed in any path you take, Henderson said.

“Carrie gave us some great and practical advice that I’ll be able to use as I continue on my career path,” Sara Eskilson, sophomore in marketing, said. “This lecture further assured me of where I want to go career-wise.”

Life after college must be seen as a marathon, not a sprint, Henderson said.

“I call it a marathon because I don’t think you hit your stride until you have a lot of years under your belt,” Henderson said. “Everyone starts out at the bottom and works their way up.”

Henderson said those looking to survive the longevity of any career should be willing to go above and beyond their duties, do those tasks well, volunteer extra help, stay educated, ask for a raise and always stay in touch with people who help them along the way.

“Remember we’re running marathons, not sprints,” Henderson said. “Sometimes we run fast, at certain points we slow down, but we always keep moving. For those of you planning long careers, there will be ups and downs and twists and turns throughout your life. Very few people have a fast and consistent sprint to the top.” 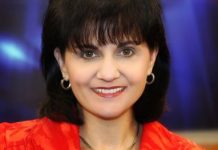