Home Community Opinion OPINION: America has forgotten how to debate

Debate has been a core value of American society for many years. Whether we are deciding what movie to see with our friends or deciding the next president of the United States, debate is an essential part of obtaining different viewpoints. However, I believe that in the past few years, debate as we know it has met its end.

The first nail in debate’s coffin is the rise of “ad hominem” fallacies. Ad hominem, Latin for “to the person,” is a direct attack on a person with an opposing viewpoint.

Well-known, recent examples of ad hominem fallacies include phrases such as “nasty woman” and “basket of deplorables.” Attacking the person you are debating with (or their supporters) lends no credence to your argument, and runs the risk of lending a poor image to your side of the debate.

Ad hominem fallacies are a major problem no matter where they appear in the debate, but many people jump to personal attacks at the beginning of their arguments. Leading with an attack on the person who is attempting to engage in a debate with you signals that you have no option other than to yell louder than your opponent.

Ad hominem attacks serve no purpose other than to belittle one’s opponent to the point where they simply quit trying to debate. At this point, the person who used the personal attacks claims “victory” because they somehow outlasted their opponent. This “victory” is hollow and unearned, as no logical argument was ever put forth, and no solution to a problem was ever found.

Another killer of debates is a lack of credible sources. Many people come to a debate well prepared, but their sources are flawed. These sources can include anything from biased news networks to completely incorrect statistics.

OPINION: The 'alt-right' movement is built on lies, misinformation

The prevalence of meritless sources in debates muddies the water for anyone who wants to learn more from a debate. Since one of the core ideas of a debate is to learn from the other person’s argument, it is vital that unbiased and verified sources are used. Spreading misinformation only causes harm to those who desire to learn.

Finally, debate has been absolutely slaughtered by people who are unwilling to listen, but overly willing to yell about their opinions.

As stated before, a core concept of debate is listening to another opinion and learning from it. However, some people enter debates with the mindset that they hold the only possible “correct” opinion.

When two people with such a mindset decide to debate, the result is usually just a bunch of shouting. When only one person holds this mindset, all valid points provided by the side that genuinely wants to learn are rejected by the obstinate side claiming that they are wrong.

If we want proper debates to return to America, we need to fix the problems with our egos. Simply learning to listen and not attack everyone with an opinion different than ours could solve many problems, not just bad debates. I dearly hope that soon our debates will once again be informative and productive. 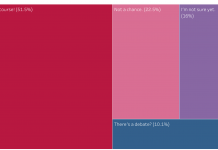 Twitter Poll: Do you plan to watch the Presidential Debate?