It’s been over 16 years since DreamWorks Animation unleashed a jade and jaded ogre known as Shrek upon the world, and $3.5 billion in ticket sales later, almost every student on the Kansas State campus could list the layered similarities between ogres and onions by heart.

Shrek’s pop cultural ubiquity was unprecedented in the 2000s, but with no new releases since “Shrek Forever After” in 2010, the franchise has been waning in relevance for seven years. Indeed, the millennial internet’s weird sense of humor has turned Shrek into more of a joke than a box office trendsetter. “Shrek is love, Shrek is life,” as they say.

However, DreamWorks recently announced a fifth film in the “Shrek” series after a buyout from NBCUniversal. Little is known about “Shrek 5” beyond its 2019-2020 release window, but this presents a perfect opportunity to create a retrospective for the animated film series. Here are the four main films in the “Shrek” franchise, ranked from worst to best.

The worst: “Shrek the Third”

As a movie judged on its own merits, “Shrek the Third” is boring and trite. As a follow-up to “Shrek 2,” this movie is a sad joke. It’s visually bland, and the plot is so uninteresting that I barely remember it after seeing the film three times. Prince Charming is a poor villain with nonsensical motivations, and none of the other characters can keep the movie afloat.

Even when the movie tries something different, it usually ends up disgusting rather than entertaining, like a bad episode of “Ren and Stimpy.” Call me old-fashioned, but Shrek in high heels and horrifying dream sequences of ogre babies pouring into every orifice of Shrek’s house are not fun for my eyeballs.

Not quite as bad I guess: “Shrek Forever After”

This movie might be objectively worse than “Shrek the Third,” but as an entertainment product, “Shrek Forever After” is kind of a blast. It’s so stupidly nonsensical and out of place in its own universe that it’s like going on a flaming rollercoaster ride through hell and loving every minute of it.

“Shrek” has always been a series about fairy tales with a twist, and “Shrek Forever After” throws that simplicity out the window for a movie about time travel, alternate universes and a bunch of oddball tropes you rarely see outside of fan fiction. It’s certainly not a movie you can enjoy without being in the right mood, but “Shrek Forever After” just barely fits into the definition of “so bad, it’s good.”

Pretty good for the most part: “Shrek 2”

The sequel to the movie that started it all is regarded by most as the best in the franchise, but I can’t find myself agreeing with that. “Shrek 2” has a lot of things going for it — Antonio Banderas as a swashbuckling kitty, for instance — but the movie is lacking the simple elegance and charm of the first.

While the original movie was very focused, building toward a singular message and climax, “Shrek 2” is a lot more meandering, with pointless scenes and characters sprinkled throughout. “Shrek 2” certainly added a lot of oniony layers to the series, but any movie that reimagines a green ogre as an animated Tony Shalhoub lookalike for a decent chunk of its runtime can’t get a pass from me.

Here it is, by process of elimination. I feel like a hipster for thinking the original is the best, but “Shrek” is just a darn good movie from start to finish. It’s an inventive and fun concept that’s handled incredibly well thanks to clever dialogue and a focused narrative.

While all three sequels have room for improvement (some sequels more than others), I can’t think of anything that I would change about “Shrek.” It somehow combines Smash Mouth and fart jokes into a package that’s much smarter than it needs to be.

Every joke lands with a punch, Lord Farquaad is the best villain in the series by far and the ending has a strong, important message about physical beauty. It’s not the best movie ever made, but “Shrek” is so good, you’ll be sad when it’s ogre.

Kyle Hampel is the reviews and opinion editor for the Collegian and a junior in English. The views and opinions expressed in this column are those of the author and do not necessarily reflect the official policy or position of the Collegian. Please send comments to opinion@kstatecollegian.com. 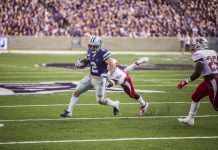